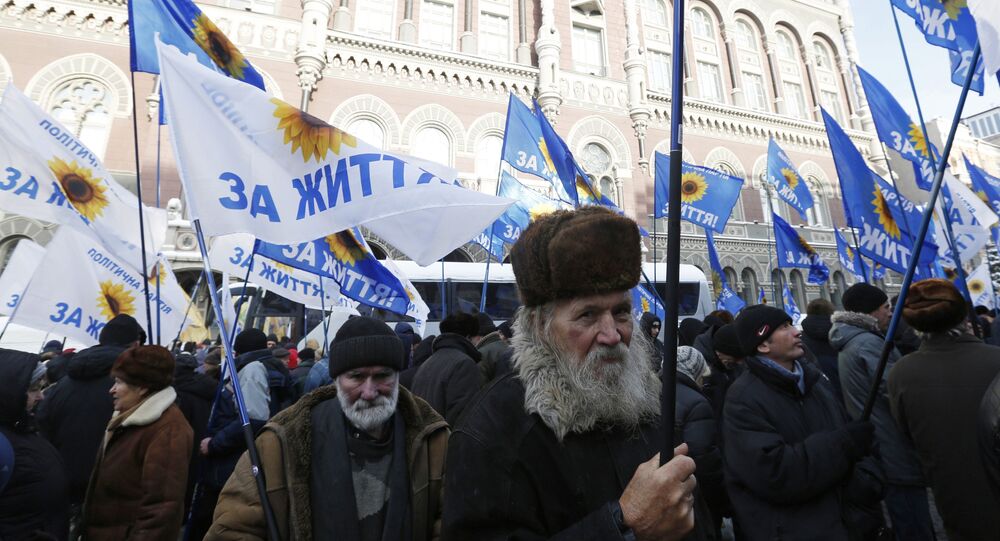 Oleksandr Klymenko, the former head of Ukraine's now-defunct Ministry of Revenues and Duties, believes that there are three disturbing possible scenarios for Ukraine's economy in 2017. These, he says, include bankruptcy, a sell-off of the country's remaining hard assets, or the total liquidation of the country's fiscal reserves.

In a post on his Facebook page, Klymenko, a former official and economist who has kept his finger on the pulse of Ukraine's economy since being exiled by the 2014 Maidan coup d'état, warned that there is a 43% chance of Ukraine declaring bankruptcy in 2017.

Klymenko laid out three possible scenarios for his country. The first is "Ukraine's selloff," which involves agreeing with the International Monetary Fund's demands that Kiev raise the retirement age and opens up the market for the sale of land. This would result in the IMF granting Kiev another loan tranche, thus allowing a default to be avoided.

© Sputnik / Alexey Kudenko
'Where All Illusions Die': EU Not Ready to Accept Ukraine as Its Member
The second scenario is simply called "bankruptcy," and would see Ukraine not just defaulting on its foreign loans and declaring a technical default, but total bankruptcy. Klymenko estimates that there is a 43% chance of this happening.

"This will occur if the government pushes through not five anti-national laws, but just two. In this case, the IMF will either delay further lending, reduce its volume, or simply withhold the funds altogether," he wrote.

Klymenko dubbed the third scenario "Operation Approval Ratings." Here, in the interest of preserving their approval ratings, Ukrainian authorities would sell off the country's gold and currency reserves, estimated to amount to about $15.5 billion. This, the economist stressed, would also lead to bankruptcy, simply putting it off until some point in the future.

Ukraine, the economic expert noted, faces several serious political and socio-economic problems, all of which are combining to threaten the country with economic collapse. These problems, Klymenko noted, include lack of trust in the national currency and the national banking system, as well as "political instability, the war [in the country's east], the desire of currency speculators to make money on fluctuations in the exchange rate, the National Bank's disregard for its constitutional obligation to ensure the national currency's stability, and many others."

© Sputnik / Vitaliy Ankov
Kiev Pays 20% More for 'French' Gas to Spite Russia as Ukraine Faces Chilly Winter
In mid-January, a leaked IMF memo published in Ukraine's Ekonomichna Pravda newspaper revealed the organization's requirements for the provision of the next $1 billion loan tranche. In addition to lifting the moratorium on the sale of land, the financial institution demands raising the pension age and changing contribution requirements, as well as a reduction in the number of civil servants, and the creation of special anti-corruption courts.

Ukrainian authorities have insisted that everything has already been agreed upon, and that the next loan package will arrive early next month. However, the IMF's executive board calendar has no information about Ukraine being on the agenda for its meetings for early February. Since 2015, Kiev has received just three tranches from the $17.5 billion credit line approved by the IMF.

Last week, the State Treasury reported that Ukraine's budget deficit has grown by 60% in 2016 compared with 2015, and now sits at $2.57 billion US. Experts have also calculated that the country's pension fund is expected to run a deficit of nearly $5 billion in 2017. This year, Kiev will need to pay international creditors $4.5 billion in interest on its loans. In addition, if a London court rules in favor of Russia, Kiev will have to repay Moscow $3 billion for a dispute stretching back to 2014.

Pensioners and low-income families have been particularly hard hit by the IMF-mandated austerity measures introduced last year. According to the agency's figures, the average Ukrainian pensioner gets the equivalent of about $74 US a month. However, over the last year, the average cost of utilities for a one-room apartment grew to $40 in the summer and $110 in the winter, making it difficult for many people to pay their utilities bills, let alone for other basic necessities.