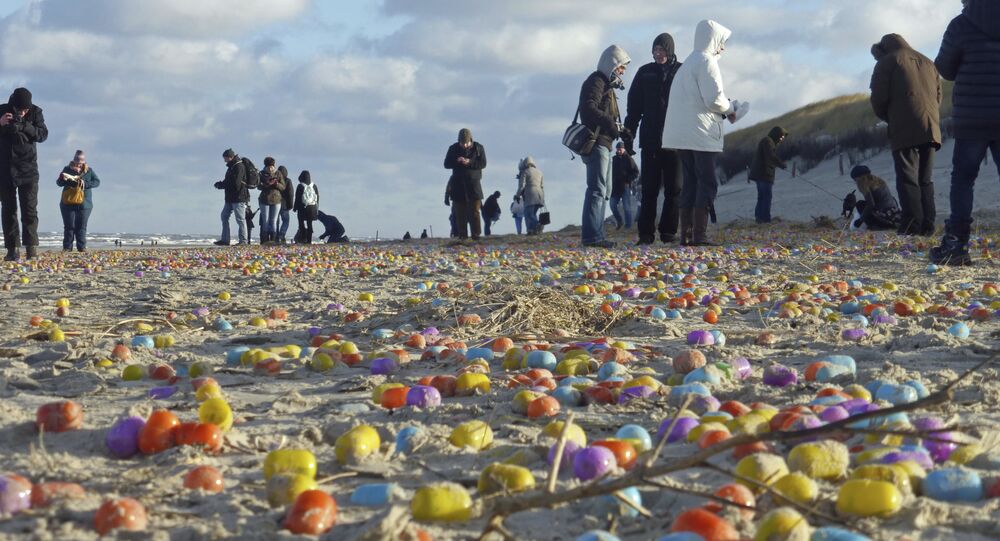 Visitors to a beach in northern Germany were astonished to find masses of Kinder Eggs washed up on the coast.

© REUTERS / Fabrizio Bensch
Germany's Left Party Blames Merkel and Oil Wars for Berlin Truck Terror
The inhabitants of Langeoog Island in the North Sea got an unusual surprise on Wednesday when hundreds of thousands of plastic Kinder eggs washed up on shore.

Local children and tourists visiting the beach were quick to collect the eggs, which were without their usual chocolate coating. They arrived after a freight ship traveling from China to Bremen lost some of its cargo along the way as a result of Storm Axel.

However, Germans will need some language skills to understand their contents, since many of the messages contained in the eggs were written in Cyrillic.

On Thursday, local authorities announced a clean-up operation, as the eggs continue to wash up on the shore. Lego sets and plastic packaging have also washed ashore, and must be cleared up, Langeoog mayor Uwe Garrels said.

Storm Axel hit Germany's northern coast on Wednesday night and has caused the worst flooding the region has seen in a decade. The storm brought wind speeds of over 123 kilometers per hour and temperatures as low as minus 20 degrees Celsius. Coastal cities like Lübeck, Rostock, Kiel and Flensburg suffered severe flooding as the water in the Baltic Sea rose to about 1.7 meters above its usual level.
...
Reddit
Google+
Blogger
Pinterest
StumbleUpon
Telegram
WhatsApp
86

Merkel Not Hopeful About Relations With Trump – German Media