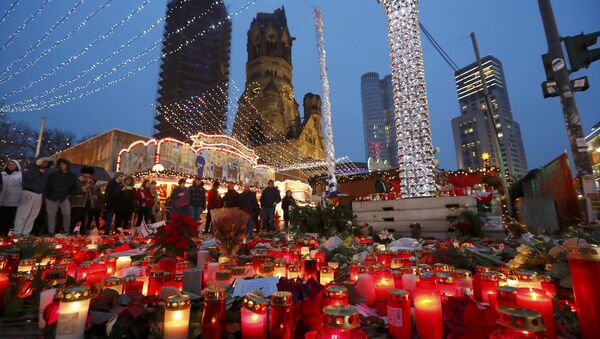 © REUTERS / Fabrizio Bensch
Subscribe
Sahra Wagenknecht, chairwoman of Die Linke in the German Bundestag, has hit out at Angela Merkel's migration policy which she says is partly responsible for last month's Berlin terror attack which left 12 dead and 48 injured.

Even Merkel Allies Demand Changes in Immigration Policy
In an interview with Germany's Stern magazine, Wagenknecht said that Merkel bears a share of the responsibility for the attack.

"There is some responsibility, but it is complex. In addition to the uncontrolled opening of the border there is the broken, cash-strapped police force which is neither staffed nor equipped adequately, as is appropriate to the situation's level of risk," Wagenknecht said.

In addition to Merkel's domestic policy, Wagenknecht added that the Chancellor's foreign policy has also contributed to the rising threat of terror in Europe.

"The Merkel-backed oil wars of the US and their allies, to whom the 'Islamic State' (Daesh) owes its existence and strength," are particularly at fault for instability in the Middle East and Europe's migration crisis, Wagenknecht said.

Wagenknecht appears to be one of few politicians outside the anti-immigration Alternative for Germany (AfD) party willing to articulate the fears of ordinary Germans about the influx of over one million refugees and migrants to Germany since 2015.

Wagenknecht, whose Die Linke party holds 64 of 630 seats in the German Bundestag, blames Merkel for the rise of the AfD, which made significant gains in several state elections last year and is hoping to build on that success in federal elections next year.

Merkel's Attempt to Woo Our Voters is Doomed to Fail, AfD Leader Tells Sputnik
According to opinion polls conducted on January 5, if federal elections were held next Sunday, the AfD would get 13-15 percent of the vote.

Wagenknecht said that Merkel's refugee policy was a spontaneous, unplanned decision which created uncertainty that benefited the AfD.

"That was ultimately worse than just thoughtless, her policy has created a lot of uncertainty and fear and strengthened the AfD."

The AfD has also linked Merkel's stance on immigration to a recent string of terror attacks in Germany.

Following the Berlin truck attack, AfD Member of the European Parliament Marcus Pretzell tweeted that the victims are "Merkel's dead." The comment was reported to Munich police, who are investigating Pretzell on the grounds of defamation.

​"When does the German state strike back? When does this cursed hypocrisy finally stop? They are Merkel's dead," Pretzell wrote.

On December 19 failed Tunisian asylum seeker Anis Amri stole a truck and drove it into a crowd of people at a Christmas market in central Berlin, killing 12 people including the truck driver Lukasz Urban before escaping to Italy via Belgium and France. He was eventually shot dead by police in Milan four days later.

Sahra Wagenknecht previously criticized Merkel's open-door policy after the Ansbach terror attack, in which a Syrian asylum seeker blew himself up outside a music festival, injuring 15 people.

"Recent events show that the admission and integration of a large number of refugees and immigrants is connected with considerable problems and more difficult than Merkel's carefree, 'we can handle this' led us to believe last fall," Wagenknecht said in July.

"The state now has to do everything in its power to ensure that people in our country feel safe again. This presupposes that we know who is in the country and, where possible, where there are potential hazards," she stated.