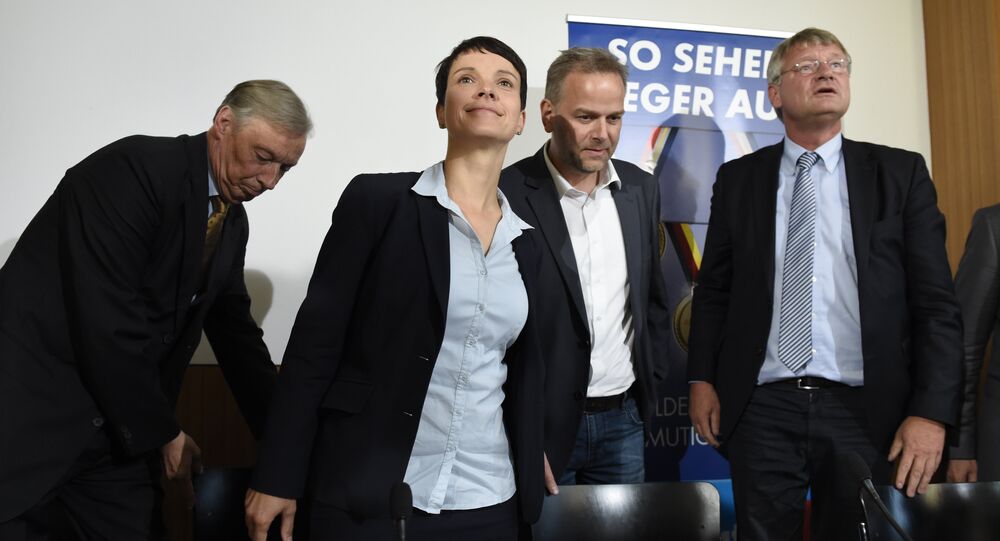 © AFP 2020 / John Macdougall
AfD's Victory in State Elections Described as 'Beginning of the End for Merkel'
Mecklenburg-Western Pomerania is one of Germany’s least densely populated regions and therefore it appears that the results of these elections may not have a significant impact on the national level. However, it should be noted that this vote was in fact considered an important test before the upcoming German parliamentary elections of 2017 – a test that the ruling party clearly failed.

According to DW, the symbolic defeat suffered by Angela Merkel and her party the election’s major talking point. Her Christian Democratic Union managed to attract only 19 percent of the votes, making it one of the party’s worst regional election results ever.

To add insult to injury, Mecklenburg-Western Pomerania is in fact Merkel’s home state, making this failure especially humiliating for her. Even more, the party that came in second, thus edging out CDU to the third place, was none other than the Alternative for Germany – the right-wing populist Eurosceptic party that openly criticizes Merkel for her stance on the migrant issue.

This election is unlikely to have any noticeable effect on the local government structure in Mecklenburg-Western Pomerania as the Social Democratic Party once again came in first by securing nearly 31 percent of votes (as compared to AfD’s 21.9 percent), ensuring that its local head Erwin Sellering retains his post of the region’s minister president.

Furthermore, it’s very likely that Sellering once again will create a coalition with CDU, providing the federal government with a comfortable majority in the local parliament, DW remarks.

Nevertheless, the success of AfD during this election cannot be ignored or downplayed. While the party failed to pass the 5-percent barrier during the Bundestag election of 2013, in the following years it managed to score impressive results during state elections.

AfD positions itself as a national-conservative party with a liberal economic program, but at the present time it also projects a powerful anti-Islamic message and vehemently opposes any attempts to allow migrants into the country.

During the Mecklenburg-Western Pomerania election, the party also managed to effectively drive out the far-right ultranationalist National Democratic Party from the local parliament, as a considerable number of NDP supporters chose to vote for AfD, the former failed to make it past the 5-percent barrier. Due to this development, NDP now has no representatives in any of Germany’s state parliaments.

However, it appears that AfD also managed to attract a considerable number of voters who previously favored the leftist movements, which can be interpreted as a sign of a 'shift to the right' among the German electorate, DW points out.

And as Angela Merkel’s approval rating continues to sag, it remains to be seen whether the Chancellor will be able to reverse this trend or succumb to it.