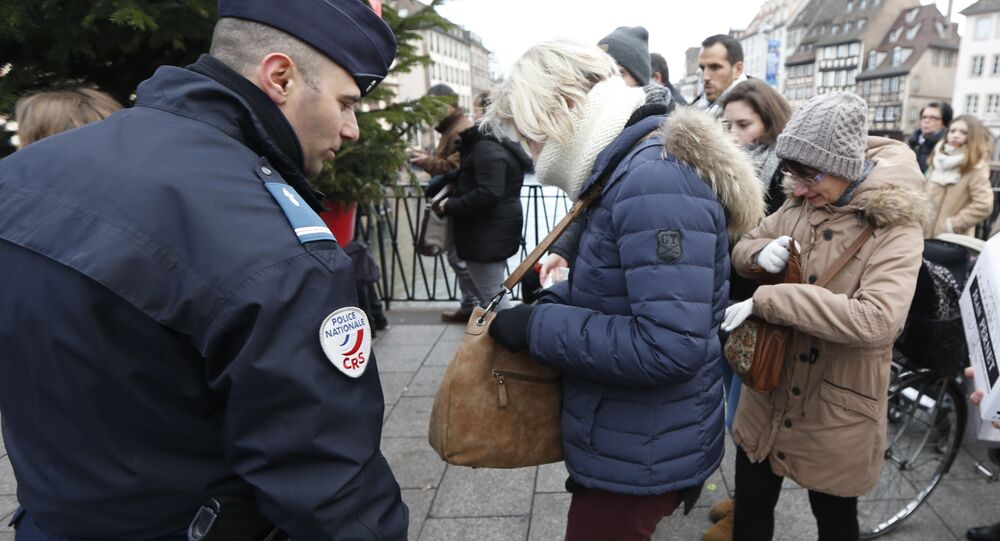 European security agencies are not yet ready to take on the new tactic used by terrorists, German security expert Uwe Kranz told Sputnik when commenting on Monday‘s terrorist attack in Berlin.

© AP Photo / Michael Probst
Police Operation Underway in Berlin as Manhunt for Market Attacker Continues
When asked by Sputnik Germany whether the German intelligence community had underestimated the terrorist threat despite the recent spate of similar attacks in Central Europe, Uwe Kranz, once a senior member of Europol and chief of police in Thuringia, said that they had failed to realize that the attacks Daesh staged in Germany over the past six months were just a prelude to much bigger ones yet to come.

When asked how well informed the security agencies really were about the tactics Daesh used in Europe the past few years, Kranz said that the terrorists made no secret of their plans to bring their war to the very heart of Europe.

“Until now their primary target was France (two attacks in Paris) and also Brussels and Copenhagen. We knew that we were going to be next  and until now our state agencies had been working  very hard [to prevent any major attacks happening in Germany].“

As for the presence of counterterrorism units within the country’s security agencies and their knowledge about the terrorists’ plans, Uwe Kranz pointed to numerous lapses in the system of training specialists serving there, especially after one of them was found to be a Daesh sympathizer.

“You need to watch your step very carefully here, no doubt about that, but they should have started dealing with the issue of personnel selection and material support a long time ago and faster too. Right now we have to start from the ground up,” he noted.

Uwe Kranz also complained about the lack of coordination between European security agencies with terrorists freely moving across Europe and migrants moving up and down the Balkan route each time using different aliases.

“We had a terrorist who had spent a year living in Germany with 20 different passports, and who had crisscrossed Europe. And now we have this Tunisian guy who was shot dead when trying to attack a police station with an axe and knife on the first anniversary of the Paris tragedy,” Kranz said, underscoring the need for closer interaction between European security agencies.

© Photo : PIxabay
Serious Hazards: Solo Terrorism and Cyberattacks Top Danish Security Concerns
Speaking about the terrorists’ new tactic of staging “lone wolf” attacks, Uwe Kranz said that Daesh has for the past few months been sending its people to Europe disguised as refugees.

“There is a whole system where Daesh is infiltrating Europe with its terrorists sending them one by one across the Mediterranean and via the Balkan route. This is al-Qaeda's strategy of a 'thousand cuts', where it is easier to hit a major enemy with a myriad small pinpricks than with one big strike, like the 9/11 attacks,” Kranz noted.

“We have spent years thinking that this kind of terrorism can be defeated by police, the armed forces or the Federal Office for the Protection of the Constitution. We must find a way to the hearts and minds of these young people through all kinds of educational  programs we ignored all these years,” Kranz emphasized.

When asked whether the Berlin attacker was one such “lone wolf” Uwe Kranz said that he didn’t think so.

“None of them acts alone. Most of the perpetrators of the recent attacks maintained direct contact with their handlers via online chats or telephone.

They may seem to be acting alone, but in fact they are part of a network of ‘lone wolf’ terrorists acting on orders from their superiors. This is exactly what happened in Berlin,” Kranz noted.

“Another mistake we made is that we failed to see a whole picture behind these ‘lone wolf’ attacks, which had been thoroughly planned in advance.”

He also said that Europe and the western world in general were being targeted.

“Besides France and Belgium, Germany, Sweden and Britain are also in their crosshairs now, just like Switzerland and Austria, which have had their share of terror attacks. No one is safe and this is the price we are all paying for our joint fight against Islamic terrorism,” Uwe Kranz said.

On Monday, a truck rammed into a crowd at a Berlin Christmas market on Breitscheidplatz square, killing at least 12 people and injuring 48 more.

Berlin police are still searching for a Tunisian national suspected of committing the attack, after finding his documents inside the truck and his fingerprints on one of its doors.

Daesh has already claimed responsibility for the attack.