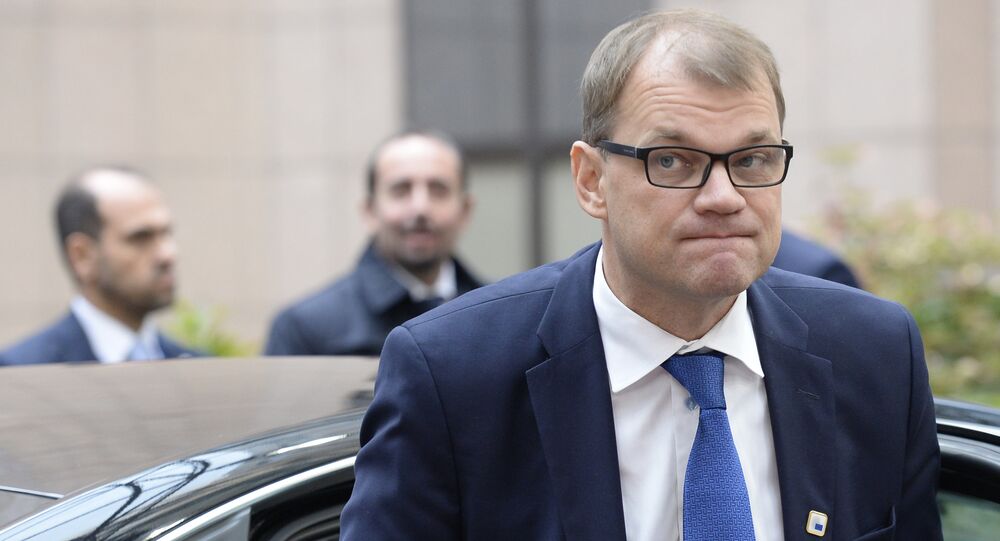 Whereas Finland righteously prides itself in its almost non-existent corruption and a high level of press freedom, Finnish Prime Minister Juha Sipilä landed in trouble for alleged nepotism and attempting to silence state media. Despite the media row, Sipilä was nevertheless awarded the Order of the White Rose, which is a high national decoration.

© AFP 2021 / JONATHAN NACKSTRAND
Finnish Officers Land on Auditors' Naughty List for Partying With Santa
In late November, Juha Sipilä landed in hot water for alleged nepotism, as the Katera Steel company, which is owned by his relatives, received a substantial order from the state mining company Terrafame, which only recently was allocated state assistance to ensure its survival.

Obviously unhappy with the coverage of the events by Finnish national broadcaster Yle, an enraged Juha Sipilä reportedly sent some 20 e-mails to Yle editor and journalists, which the Finnish newspaper Kuvalehti perceived as attempts to silence the media.

The passionate correspondence between Sipilä and, inter alia, Yle news editor Atte Jääskeläinen later resulted in a news story by Yle assessing the implications of the conflict of interests involving Sipilä was dropped. A further story written about the prime minister's e-mails was also shelved.

​On December 1, Yle reporter Salla Vuorikoski published her correspondence with PM Sipilä on her Facebook page. In his final post, Sipilä stated that his confidence in Yle was "about nil."

© Wikipedia / Neptuul
Sweden Gains UNSC Leverage Through Logrolling With 'Authoritarian' Nations
Finnish Social Democrats leader Antti Rinne voiced his concern about the incident that could be perceived as attempt to influence the media coverage.

Sipilä later admitted to having reacted emotionally, yet denied all allegations of favoritism, conflict of interests or silencing the media.

"I reacted emotionally because my family have been subjected to harsh things lately. When the family becomes a part of this, one cannot always answer in a dispassionate way. Then the bubbling emotions come to the surface," Sipilä said, pledging never to engage in direct contact with an editor.

The Katera Steel Company from the Finnish city of Kajaani, owned by the family of Prime Minister Juha Sipilä, won a €500 million tender by the long-suffering state company Terrafame, which also owns the controversial Talvivaara nickel mine, which was earlier slated for closure, only to be sensationally revived in November. Finnish national broadcaster Yle voiced concern about possible corruption and nepotism, as it was none other than Sipilä who had lobbied the state support of the bankrupt mine.

© Wikipedia / russavia
Norway's Oil Fund Makes a Killing on 'Prison-Like' Refugee Camps
​According to Yle, the Katera Steel Company was founded by Sipilä's grandfather in 1961. At present, the company is owned by Sipilä's cousin and uncles, has about 50 employees and net sales of €5 million.

The recent turmoil evoked memories of other scandals surrounding Terrafame, which was earlier caught in a number of fraught cases, as well one of the worst environmental disasters in Finland's history. In November 2012, a tailings bond burst at Talvivaara mine, resulting in a leakage of 1.4 million cubic meters of toxic water. The leak, which took ten days to seal, poisoned the Finnish countryside and resulted in a 50-fold increase in the concentration of uranium in near-by water sources. In May 2013, a leak of sulfuric acid occurred at Talvivaara, whereupon the company's license for uranium mining was revoked.

​Finland has been rated highest in the World Press Freedom index for the past five years.