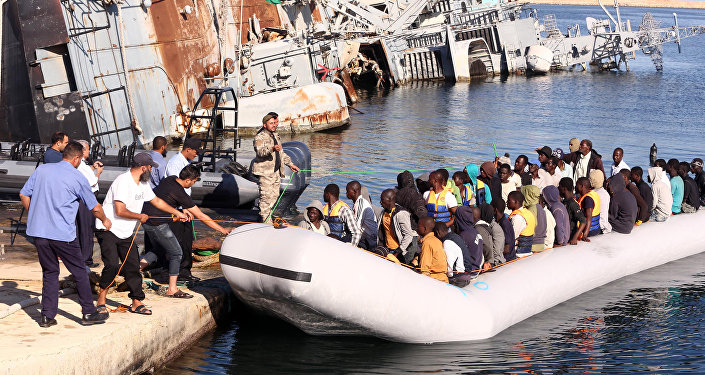 © AFP 2019 / Mahmud Turkia
German Marshall-Style Plan for Africa 'Has Nothing to Do With Curbing Migration'
On Tuesday morning German police in ten different states launched raids on around 200 apartments and two mosques belonging to "Die wahre Religion" (The True Religion), a Salafist extremist group.

The raids were carried out at the same time as German Interior Minister Thomas de Maiziere imposed a ban on the group, which was set up in Cologne in 2005 by a Palestinian immigrant called Ibrahim Abou-Nagie.

Since 2011 Abou-Nagie and his fellow missionaries have carried out the controversial "Read" campaign, which distributes free copies of the Koran to passers-by at transport hubs or shopping centers.

Abou-Nagie, who has also sought to spread his campaign to Austria, France, Sweden, and Brazil, was in Malaysia at the time of the raid, which also included his home in Bonn.

Salafism is a fundamentalist form of Sunni Islam which condemns theological innovation, advocating strict adherence to sharia law and the institution of a theocratic Islamic state.

The German government has described the movement as "a particularly radical form of Islamism," with close links to terrorism.

According to Germany's Interior Ministry, at least 140 activists or supporters of The True Religion have traveled to Iraq and Syria to fight for Daesh or other Islamic terrorist groups.

Wolfgang Bosbach, a Bundestag deputy for Angela Merkel's Christian Democratic Party (CDU), told Sputnik Deutschland that the raids are a sign that the German authorities are taking the Salafist threat seriously.

"Salafist movements of all kinds are clearly directed against the liberal-democratic social order in Germany. These activists are not only concerned with their own personal religious convictions, but in essence they put the words and deeds of the prophet and his revelation above secular law. This is unacceptable for a state of law," Bosbach said.

© REUTERS / Michaela Rehle
New Poll Finds Germans Want Immediate Freeze on Immigration
While the group became well-known for its "Read" campaign, Bosbach said that handing out free Korans is not the reason for the raid. Rather, it is the group's extra activities which have alarmed the authorities.

"You can be sure that this group's activity was not just prohibited because its activists are handing out Korans that can be sold or distributed in many towns across Germany. The issue is whether there was any other activity going on, which is counter to our state constitution. In particular, the recruitment of fighters by Islamists, drawing attention to Daesh, raising funds for Islamist militants and so on," Bosbach said.

The deputy said that banning the group is the right move, and disagreed with criticism that the prohibition forces the group and its followers underground.

"That (logic) would make it generally impossible to ban these organizations. This argument comes up again and again. I understand it, but this can be seen from the exact opposite point of view: if the legal requirements for a ban are met, then why not use this opportunity to break the organization's structure and take away its assets?"

"If the state does nothing and only observes, then the association can continue to operate using its (available) legal and organizational opportunities, and that is exactly what a ban should be used to prevent," Bosbach said.