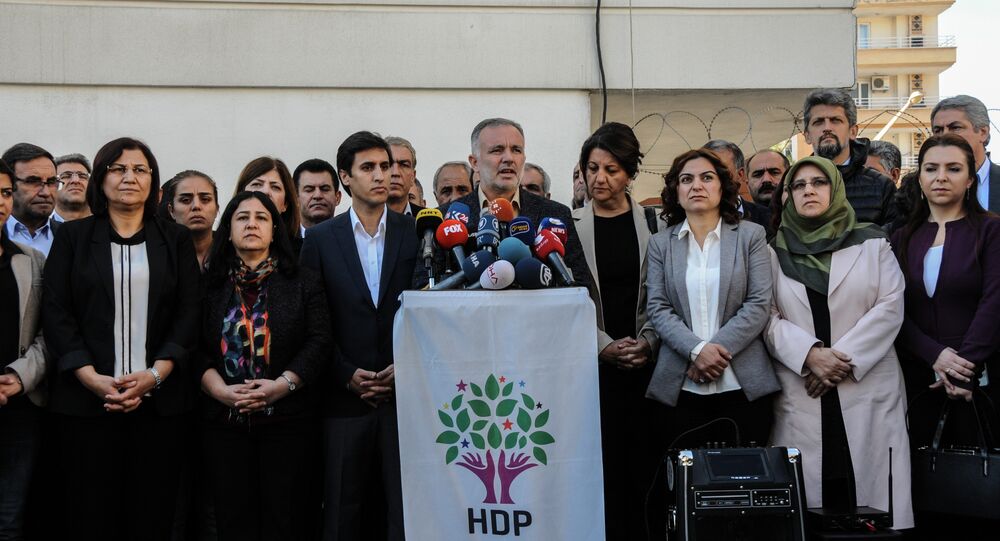 On Friday a dozen MPs from the pro-Kurdish Peoples' Democratic Party (HDP) were detained across the country for questioning over terror-related probes. Director of the Centre for Transnational Studies in London, Professor Ibrahim Sirkeci, told Radio Sputnik what the recent detentions of pro-Kurdish lawmakers could possibly lead to.

“I’m not expecting a civil war, but it is definitely a very bold move by the Turkish government. I haven’t seen anything like that since the early 1990s. Everyone on the Kurdish side is trying to calm down tensions, telling their supporters not to make any moves, not to hold rallies. But obviously there is the other side of the equation, which is PKK and although the government says that these MPs are somehow linked to PKK, PKK acts independently and the calls from Kurdish MPs may not necessarily be followed by PKK,” Professor Sirkeci said.

© AFP 2021 / AHMAD AL-RUBAYE
PKK Leader Promises to Respond to Detention of Pro-Kurdish Politicians in Turkey
On Friday the Turkish city of Diyarbakir war rocked by a blast  that killed at least nine people and injured more than a hundred. Ankara blamed the attack on PKK and it is also claimed by Daesh.

When asked whether this attack could lead to a new crackdown on the Kurds, Professor Sirkeci said that PKK had no reason to target Diyarbakir because it is a predominantly Kurdish city where about 70 percent of local residents vote for Kurdish parties.

“That would be like shooting themselves in the foot. I think the Daesh claim of responsibility for this attack is closer to the truth than alleging that it was done by PKK. PKK may have done some stupid things in the past, but after seeing their MPs going to prison I wouldn’t rule out anything now.”

Washington, Brussels and the United Nations have condemned the latest detention of opposition lawmakers in Turkey.

Answering a question about how this could affect Ankara’s relations with Brussels, Ibrahim Sirkeci said that these relations have already been in decline, especially since the failed coup because of the purges where about 100,000 people have either  been suspended, imprisoned or lost their jobs.

© Flickr / jo.schz
Detention of Pro-Kurdish MPs 'Calls Into Question' Future of Turkey-EU Ties – EU Parliament
“There are so many left-wing activists among these people, journalists, academics, Kurdish political activists and so on. This is a crackdown on all opposition, not just the Gülen movement. This attack on Kurds has to do with Turkey’s ambitions in the Middle East, in Mosul and other cities in northern Iraq, which are dear to Turkey because of the Turkish minority living there. I think that these attacks and the detainment of Kurdish MPs have more to do with the events in northern Iraq than Fethullah Gülen” Professor Ibrahim Sirkeci said in conclusion.

Tensions between Ankara and the Turkish Kurds escalated in July 2015 when a ceasefire between Turkey and the Kurdistan Workers’ Party collapsed over a series of terrorist attacks Turkey was quick to blame on PKK  members.

In May the Turkish parliament voted a bill that allows stripping lawmakers of parliamentary immunity.