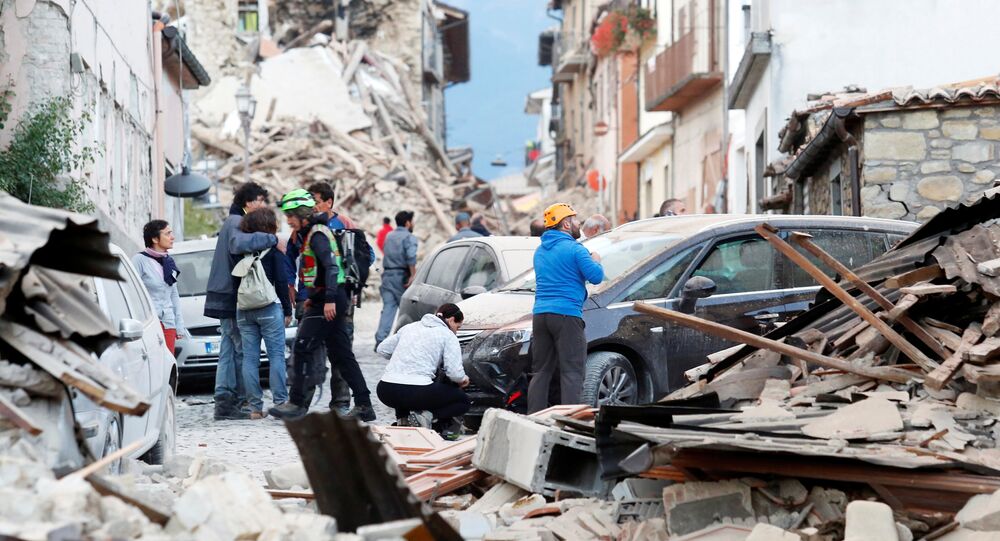 Italian Quake: Russia Ready to Help Out, While EU Drags Its Feet

In an interview with Sputnik Italy, Stefano Maullu, a European MP representing the Forza Italia party of former Prime Minister Silvio Berlusconi, complained about the EU’s refusal to provide enough financial help to his country still aching from the aftermath of Sunday's devastating earthquake.

© AFP 2021 / ANDREAS SOLARO
Italy's President to Cut Short Israel Visit to Attend Quake-Hit Areas
In a letter to the European Parliament, Stefano Maullu called on his fellow MEPs to visit the areas hit by Sunday’s quake, which left many cultural monuments badly damaged and a growing number of local homeowners seeking police help against marauding gangs.

“Brussels is unhappy about the Italian government’s letter requesting financial assistance. Prime Minister [Matteo] Renzi had asked for 3.4 billion euros only to be promised just 600 million. Brussels fears that Renzi might use the money elsewhere, but the world heritage destroyed by this catastrophe matters more than anyone’s political ambitions or preferences. It needs to be taken care of now!” Stefano Maullu told Sputnik Italy.

He also mentioned the quick offer of help from Russia.

“In a telephone linkup with [Renzi] President Putin not only expressed sympathy but also offered help in dealing with the consequences of this natural disaster. How come the ‘bad’ Russia hit by sanctions was the first to lend us a hand, while the EU is still hesitating?” he wondered.

He complained about the lack of collective responsibility on the part of the EU towards Italy, which is one of its founding members. He added that even if Matteo Renzi wanted to spend some of the funds for other purposes, such an attitude was absolutely impermissible.

“I really appreciate this friendly gesture by Putin and the Russian Federation. Our two countries have a long history of friendship. Russia is part and parcel of Europe. It is a country we should work with very closely. The sanctions were a tragic mistake, which was exacerbated even further by NATO’s moving closer to Russia’s borders,” Maullu continued.

He also said that as a traditional mediator between NATO and the Warsaw Pact countries, Italy should use diplomacy to ease the tensions now existing between Russia and the West.

“As for the destruction (from Sunday’s quake), Italy needs to preserve the houses built during the 1960s-1980s and which are not earthquake-resistant and, of course, the small towns, churches, belfries, arenas and aqueducts which are this country’s contribution to the history of Stefano

Maullu mentioned two ancient churches — the church of St. Benedict and the church of Santa Maria Argentea — which were destroyed in the town of Norcia.

© REUTERS / Remo Casilli
Italian PM on Biggest Earthquake in 36 Years: 'We Are Happy There Were No Victims'
“This is where the EU money should go to. Culture and history have no borders,” he emphasized.

Stefano Maullo mentioned the letter he had sent to the head of the European Parliament’s Commission on Culture and Education (CULT) inviting MEPs to come and see with their own eyes the colossal damage caused by Sunday’s tremors.

“Brussels [should move quickly] and make maximum use of EU funds to salvage this country’s cultural heritage,” Stafano Maullo said.

Eight over 4.0-magnitude earthquakes hit central Italy on Sunday bringing down numerous buildings across the country. No deaths were reported but a number of people were injured, local civil protection services said.