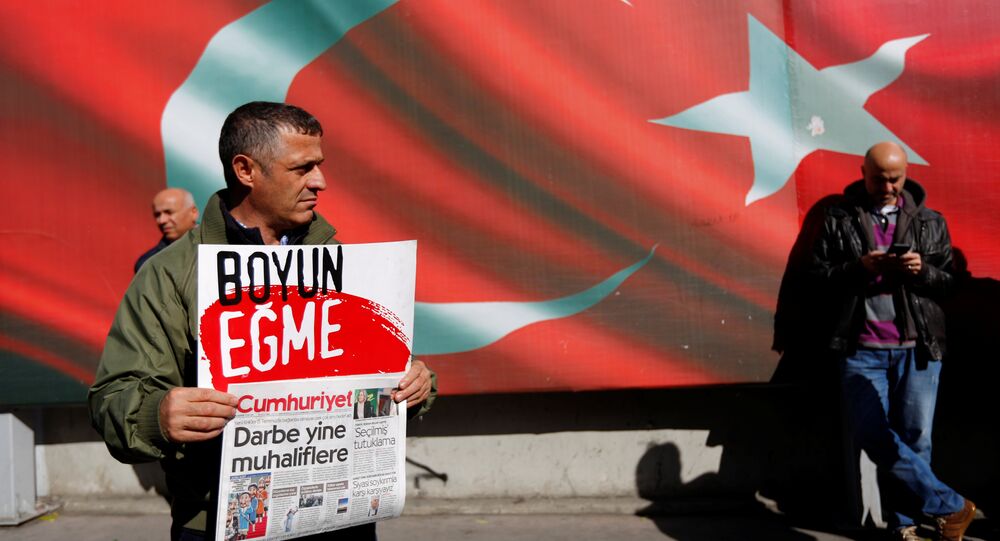 There are growing fears over Turkey's relationship with the EU, after Turkish police detained the editor of the opposition Cumhuriyet newspaper, while government officials proposed the reintroduction of the death penalty, further raising questions over the future of the EU-Turkey migration deal.

Ankara's crackdown on Turkish media continued on Monday (October 31), with state media in Turkey reporting that Cumhuriyet editor Murat Sabuncu, and eight other newspaper staff were detained by police, while arrest warrants were also issued for a number of others

The Istanbul chief prosecutor's office released a statement saying the probe into Cumhuriyet was launched amid allegations the paper and its staff were engaging in activities "on behalf of" the movement of exiled cleric Fethullah Gulen and the banned Kurdistan Workers' Party (PKK).

11 Cumhuriyet journalists detained today. 15 media shut down this w/e. State of emergency is cover for systematic purge of dissenting voices

​Gulen has been accused by the Turkish government of being the mastermind behind Turkey's fail coup in July, which resulted in the deaths of more than 270 people.

The crackdown on Cumhuriyet is set to further inflame tensions between Turkey and the EU, with European leaders criticizing Ankara's approach to the country's media in the wake of July's failed coup.

New closures of media, deplorable raid on daily #Cumhuriyet show how little regard is left for media freedom & pluralism in #Turkey

Critics have accused President Recep Tayyip Erdogan of using an emergency decree imposed after the coup to silence political and social opposition, with more than 100,000 people being either sacked or suspended from their jobs since July.

The European concerns over the perceived purges in the media and civil society has also been compounded by suggestions that the Turkish government is looking to reintroduce the death penalty.

"We want the death penalty."

While not setting out a timeline, Erdogan said the proposal would be taken to parliament.

President Erdogan stated that most of the countries still have death penalty but the data shows other wise.https://t.co/Vw0XyS9q1C#Turkey pic.twitter.com/63AyyShkCH

​Capital punishment was abolished in Turkey in 2004 as part of plans to gain EU accession, however calls for a return have increased following July's failed coup.

European officials were quick to condemn any plans to reintroduce the death penalty, with Austrian Foreign Minister Sebastian Kurz saying such a development would "slam the door shut to the European Union."

With his initiative about reintroduction of the death penalty #Erdogan forfeits any chances for Turkey's accession to the #EU.

​"The death penalty is a cruel and inhumane form of punishment, which has to be abolished worldwide and stands in clear contradiction to the European values," Kurz told the Austrian Press Agency.

The latest developments have raised more questions over the future of the EU-Turkey migration deal, with fears rising tensions between the parties could scupper it.

The EU has been critical of the Turkish government's post-coup actions, sparking an angry rebuke from Ankara, who argued it had not received adequate support and solidarity from its European partners.

​While the crackdown on the country's media is set to inflame tensions, the potential reintroduction of the death penalty is seen as a "red line" issue for Europe that would officially put an end to Turkey's EU accession plans and would likely sink the migration deal negotiated between Ankara and Brussels.

Such a development would be seen as a disaster in Brussels, with European officials repeatedly ruling out suggestions of a "Plan B" migration plan, while others fear a collapse in the deal could once again trigger a mass migration of people from Turkey towards Greece.

No End to Purge in Turkey: 10,000 More Civil Workers Dismissed