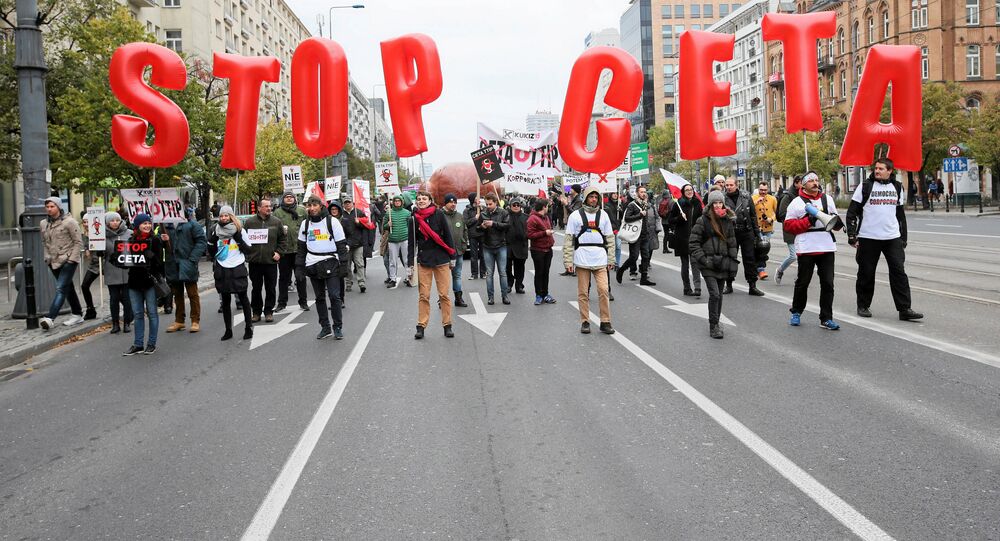 EU trade ministers are Tuesday (October 18) set to finalize the controversial Comprehensive Economic and Trade Agreement with Canada (CETA), which is supposed to be signed later this month, but facing growing opposition amid calls for it to be scrapped, Sputnik has been told.

© REUTERS / Eric Vidal
Legal Action Launched Over Secrecy Surrounding TTIP, CETA Trade Deals
The Comprehensive Economic and Trade Agreement (CETA), is an EU-Canada trade treaty is set for ratification by all 28 EU member states, each of whom has to agree the terms of the offer EU firms more and better business opportunities in Canada and support jobs in Europe.

However, CETA — along with the Transatlantic Trade and Investment Partnership (TTIP) proposed trade deal with the US — has come in for criticism for lowering regulatory standards in the EU, which tend to be tighter for food production and preparation, agriculture, pharmaceuticals and the environment.

Central to the trade agreements is the principle that, if EU states' regulatory policies preclude non-EU countries from selling their goods or services, the company can sue for loss of earnings under the Investor State Dispute Settlement (ISDS) system, which is a trade tribunal separate form member states' judiciaries.

More than 200 people in front of special session of EU Council to say #StopCETA #WallonsTenezBon#RebootDemocracy pic.twitter.com/DHnAMKNgks

​Nick Dearden, director of Global Justice Now, told Sputnik: "CETA has been stalled for 2 years now, because European and Canadian citizens have clearly said they don't want this toxic trade deal which was negotiated behind closed doors. As a result, a number of countries have still said they might not vote for it. We urge those governments to follow through on this.

"It has become increasingly clear that the EU's entire trade policy needs to be re-examined. Trade should be about helping sell goods to other countries in a way that benefits both parties. But deals like TTIP and CETA are actually about giving huge new powers to big business, as 101 law professors from across Europe confirmed in an opinion released today.  It looks like TTIP is dead — let's make sure CETA follows it. "

© AP Photo / Alik Keplicz
Some 7,000 Protest Against CETA, TTIP Trade Deals in Warsaw
Belgium could block the CETA deal in any case because it has to be passed by all 28 EU member states' parliaments, which — in the case of Belgium — means its federal as well as its five regional governments. Wallonia has already said it will veto the deal, which will throw the whole negotiations into chaos.

Meanwhile, Germany's Economy Minister Sigmar Gabriel — speaking ahead of the meeting in Luxembourg, October 18 — said: "I don't think the agreement can fail, but Belgium and Romania, for example, still have questions that perhaps can be answered today. Perhaps we need a bit more time."

Some 7,000 Protest Against CETA, TTIP Trade Deals in Warsaw

TTIP Unlikely to Be Concluded Before US Elections - Official