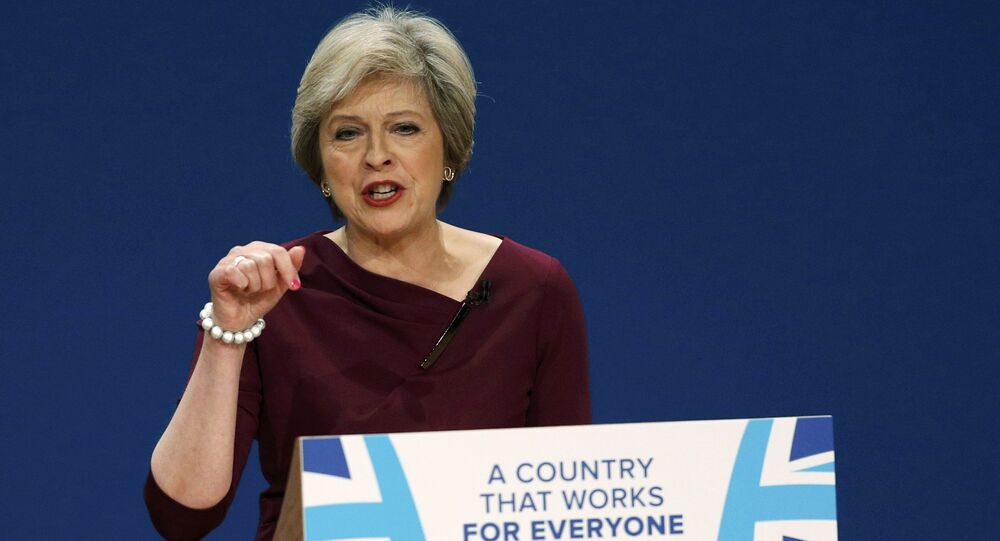 Britain's Prime Minister has been accused of "playing to the gallery" instead of preparing her party and the British public for Brexit.

© REUTERS / Damir Sagolj
'Harsh and Reckless': UK's May Faces Internal Backlash After Hard Brexit Push
"Theresa May is playing too much to the galleries at home without thinking," Dr. Waltraud Schelkle, associate professor of political economy at London School of Economics told Sputnik.

"Mrs. May's rhetoric is okay if you're a Brexiter, but after a referendum, there needs to be a a more moderate voice," she said.

"Theresa May should be preparing her party and the electorate for the compromises that need to be made and the deals that need to be struck with the EU instead of just whipping up the 'leave' voters. That's an astonishingly risky strategy," Dr. Schelkle told Sputnik.

Sterling has fallen in value by 18 percent since the UK voted in June 2016 to leave the European Union and confidence in Britain's economy is dropping alongside the value of the pound as ministers make more statements surrounding Brexit.

Described by one financial analyst as replicating the behavior of "an emerging markets currency," the value of the pound, whether slightly up or down, is reacting to various comments made by government ministers — and not necessarily statements made in the House of Commons.

"Any political statements or indications of a move can change the market, but I don't think international investors listen to the Parliament. They do however listen to the increasingly uncompromising stance of the British government," Dr. Schelkle says.

"For example, Home Secretary Amber Rudd is going against firms that employ foreigners and the Prime Minister Theresa May is basically telling the city, London's financial district, that they should not hope for any sympathy from her government."

© CC0 / PIxabay
UK Pound Plummets as Hollande Calls for Hard Brexit
​Theresa May's 'hard talk' is increasingly being met with a hardening stance from other EU leaders who won't be willing to continually compromise.

"German chancellor Angela Merkel is starting to adopt a similar stance to France and the European Commission," Dr. Schelkle explains.

"It's like they're saying, 'If Britain plays hardball, we'll play hard ball. The integrity of the European Union is more important to us than bilateral trade'."

"If Theresa May continues with her hard stance, EU nationals will become less generous. She has to prepare the British public that she must seek compromises and request that the EU accept her demands, not just assume they will."

Meanwhile Mark Carney, the governor of the Bank of England has defended the drop in value of the pound suggesting the fall "helps the economy adjust."

The UK, has experienced is first taste of the impact Brexit will have on the price of food, following a public row between global grocers Unilever and British supermarket giant, Tesco.

Expecting @AmberRudd_MP to announce that companies will be forced to list which staff have consumed #Marmite at lunchtime? #Brexit #Unilever

Mark Carney has said that the price of food will go up because of an increase in inflation and devalue of the pound, adding that it was "going to get difficult" for people on low-incomes.

This whole #Marmite thing has beenl thinking: if prices keep going up in the wake of #Brexit, how will the #foodbank s cope?

​Theresa May's tough stance could end up leaving a bitter taste in many mouths.

Sit back & watch #Brexit press & #Leave play all of this. It'll be the best reality show you'll ever see.#marmitepic.twitter.com/eDSgeOTOBi

Brexit's Collateral Damage: Finns Buckle up for a Hard Landing