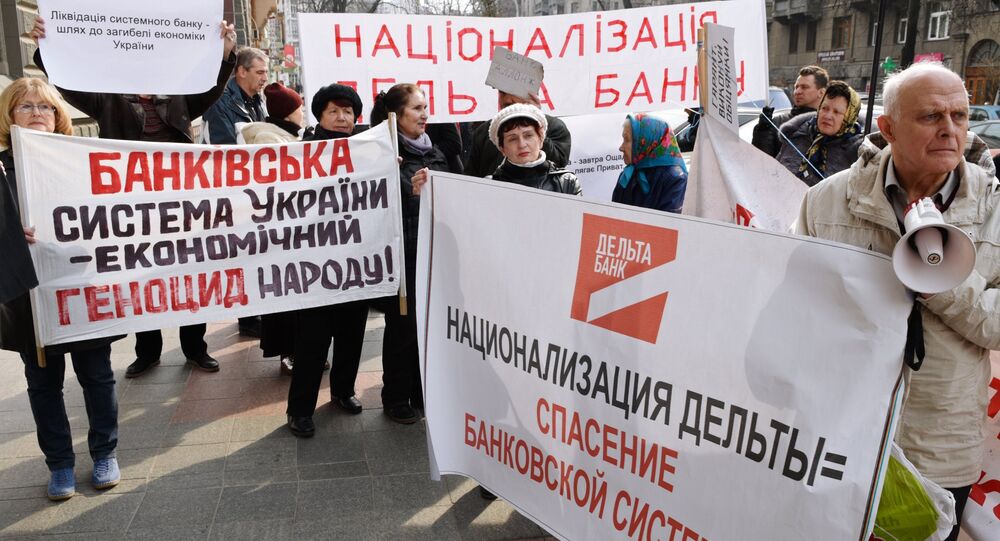 Despite the billions of dollars Ukraine has received from the IMF and other lending organizations over the past few years, ordinary people have seen their incomes plummet, forcing many to go for cheap vodka, most of which is fake and dangerous.

Seventy-seven cases of alcohol poisoning were reported in the country’s Zhytomyr, Donetsk and Kharkiv regions between September 21 and 30, and 38 people subsequently died, a sanitary inspection official said.

Many local experts blame the recent spike in alcohol poisoning in Ukraine on a growing number of illegal producers and the lack of state control over the production and sale of alcohol.

“When you have structural and not necessarily useful reforms happening in the country this opens the door to shady business and corruption,” IFC Markets analysts Dmytro Lukashev said.

Prime Minister Volodymyr Groysman recently admitted that the shadow economy accounted for a hefty 1 trillion hryvnias ($44 billion) – almost half of the country’s GDP.

According to the World Health Organization, an estimated 10,000 people die from alcohol poisoning in Ukraine each year — three times more than in Russia.

This is because cash-strapped as they are, many people simply can’t afford to buy quality alcohol and are forced to go for cheap vodka, most of which is fake and dangerous.

This is not at all surprising in a country where double-digit inflation and galloping prices have sent the average monthly wages down from $400 in 2013 to less than $200 now.

To make matters worse, there is no such thing as a minimum price on vodka. Legal vodka producers have been asking the government to bring it back only to see the authorities jacking up the alcohol excise duty.

“Utility prices now account for 22 percent of an average household’s spending, compared to just 10 percent in 2016. This is an overkill, all due to the tenfold rise in gas prices,” Ukrainian economist Olexandr Ohrymenko said.

Ukrainians are facing higher prices, complying with IMF demands for Ukraine to raise energy tariffs for households and utilities.

As a result, people have been forced to eat less with sales of food products having dropped by 20 percent over the past six months alone. People now buy less meat, vegetables, dairy products and fish, even sugar, pasta and cereals.

© AFP 2021 / SERGEI SUPINSKY
Maidan's Tragic Aftermath: Ukraine Slides Into 'Staggering' Poverty
Personal savings are down as people now have no money to set aside. Previously the average person could save up to 20 percent of his or her earnings, while now, even by conservative estimates, this figure is less than 10 percent,” Ohrymenko added.

Meanwhile, despite the economic hardship millions of Ukrainians are facing these days, the government keeps splurging on arms with the 2016 defense budget raised to 113 billion hryvnias ($5 billion) from  90 billion ($4 billion) in 2015.

In percentage terms Ukraine aims to spend 5% of its GDP on defense, which is 2.5 times higher than NATO countries have agreed to.

This is really bad news for ordinary Ukrainians who will have to work more to make ends meet while the generals will get more arms to kill independence supporters in eastern Ukraine.