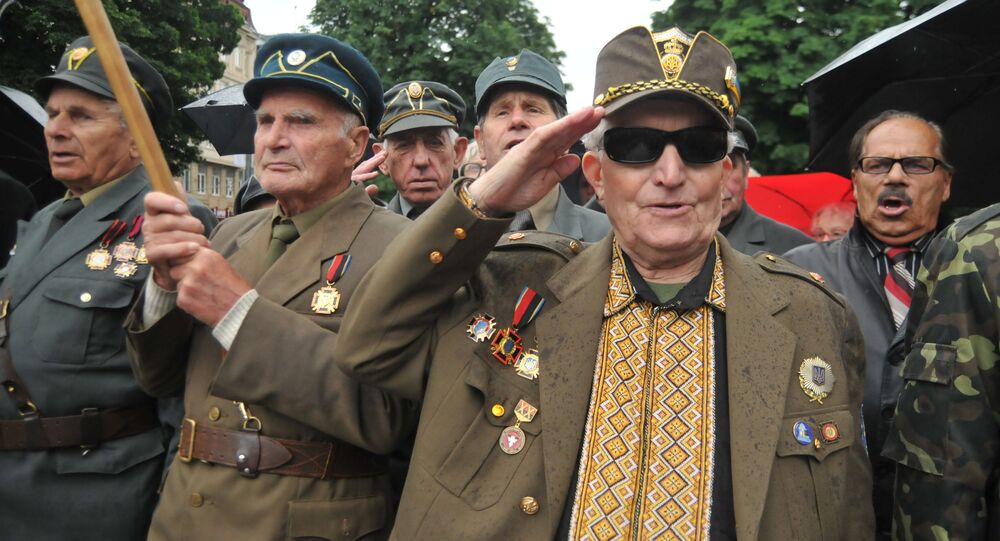 Books glorifying the criminal activity of Ukrainian ultranationalists and Nazi collaborators responsible for mass murders in Ukraine during WWII are freely available at the library of a Ukrainian -language school in Bartoszyce, Poland.

The books offered to the school's students include, among others, publications about the Ukrainian nationalist leader Stepan Bandera and Volodymyr Shchehelski, one of the top commanders of the Ukrainian Insurgent Army (UPA) who ordered the killings of thousands of innocent people in southeastern Poland during WWII.

© Wikipedia / sfu
Russian Foreign Ministry Outraged by Poland's Treatment of Soviet Monuments
When asked by Sputnik how come books about Stepan Bandera and others ended up in Polish schools, Andrzej Zapalowski, the President of the Polish Geopolitical Society and onetime member of the European Parliament, spoke about the increased activity of the so-called Polish Ukrainians’ Union.

Its members dismiss any criticism of their activity as a violation of rights of ethnic Ukrainians living in Poland.

“It is under this disguise that they are spreading their ideas of Ukrainian nationalism, but when speaking about Ukrainian traditions they always have in mind those of Western Ukraine, of Stepan Bandera and his sidekicks!” Andrzej Zapalowski said, adding that such publications were apparently available in all five Ukrainian schools in Poland.

The school in Bartoszyce, attended by Polish children of Ukrainian descent, is financed by the state. The abovementioned publications are a gift from the Institute of National Remembrance in Kiev.

The Bartoszyce school’s headmaster Lubomira Tchorz said that the school program was meant to instill in the children “ideas of Ukrainian patriotism,” that these books were not banned in Poland and, when asked about Bandera, she said that “Well, every people has its heroes.”

Not everyone in Poland agrees with this though. Including Polish MP Tomasz Rzymkowski who said that by accepting such ultranationalist literature from Kiev, the Bartoszyce school completely ignored the traditions of Poland.

“I think that the teachers knew that their action flew in the face of Polish citizens! They have become part of the propaganda of a totalitarian state Bandera and his associates strove for. I can’t imagine any school anywhere buying books which disseminate ideas of German or Italian fascism, let alone books by Adolf Hitler!” Andrzej Zapalowski fumed.

He recalled how two years ago local Ukrainian schoolchildren in Przemyśl were taken to a local cemetery to lay wreaths at the graves of Ukrainian nationalists who killed peaceful civilians.

“You can’t bring up kids on books that instill hatred toward other people. I think that what happened in Bartoszyce is a major scandal,” Andrzej Zapalowski noted, adding that he expected greater oversight on the part of regional education officials.

Stepan Bandera is one of the founders of the Ukrainian Rebel Army, or UNA, that collaborated with Nazis and fought against the Red Army during the Second World War.

After the defeat of German Nazism in 1945, members of the UNA and the paramilitary UPA units continued their struggle against the Soviet Union.