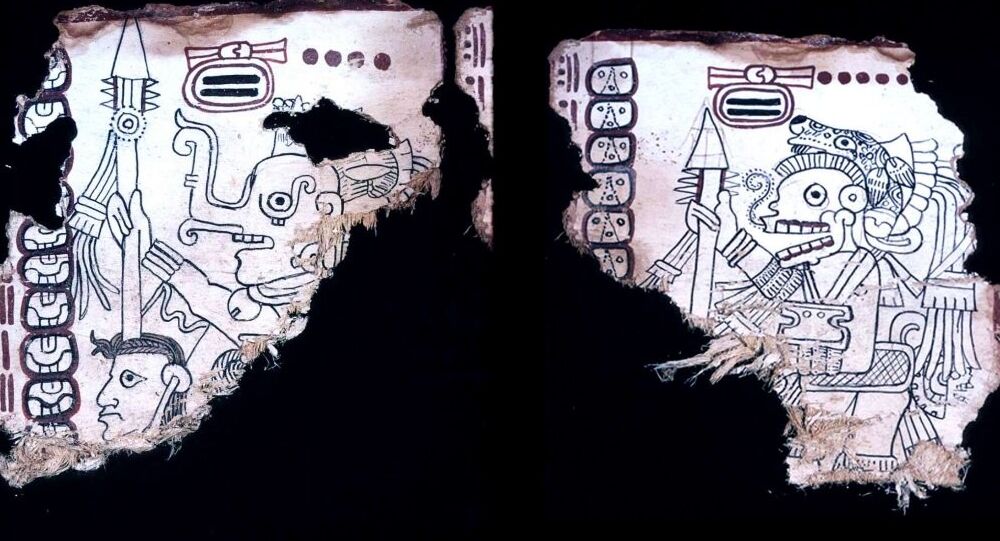 Reversals in science can be commonplace and by the very nature of the research, where evidential aspects of a study combine with theoretical explanations, it can also be encouraged. But when it comes to the 900-year-old Grolier Codex, it's a big deal for archaeology worldwide that such a significant reversal has been made so confidently.

The authenticity of the Grolier Codex has now been disputed for over four decades since it surfaced in 1971. It got named after the book lovers' Grolier club, where it was first displayed by revered US-based archaeologist Michael Coe, and it is said to be a 900-year-old Mayan astronomy guide.

Coe has been speaking about, and has also written about the questionable history of a book that, if truly authentic as is currently claimed, would make it the oldest known book written in the Americas.

© Photo : Justin Kerr
(L) A young deity, probably male but possibly female, is bedecked with an elaborate reptilian headdress and wears a tubular plug through the ear lobe. (R) God K, attired as a Toltec warrior.

Michael Coe himself, alongside a team of other researchers, including Brown University's social scientist and Mayanist scholar Stephen Houston, who after intensive reevaluation of the Mayan text, are now declaring it as completely genuine and in no way a forgery.

Sputnik spoke to Stephen Houston at Brown University in Rhode Island, US about the reasons his team have been able to revise previous claims around the book.

"We decided to return and look at it very carefully, to check through all of the many criticisms one at a time. Now we are issuing a definitive facsimile of the book. There can't be the slightest doubt that the Grolier is genuine," Professor Houston told Sputnik.

© Photo : Justin Kerr
(L) This figure is believed to be the old goddess known as Ix Chel among the Maya, the counterpart of Tlazolteoll and Coatlicue in the Mexican pantheon, on the basis of her aged face and the snakes in her hair. (R) The Death God (God A), with simple headdress and knife in hand, has just decapitated an old Roman-nosed god, from whose neck blood pours.

"There are new studies of imagery, hieroglyphs, underpainting, direct dating, pigment technology (some accumulating over the last few years) and upon review of prior criticisms, it all systematically disables claims that the Grolier is a forgery. The knowledge that would have been necessary in the mid to early 1960s, when the Grolier was found, was simply not available. There are fake codices from that period and before which exist, they always copy, very badly, the known Maya books. The Grolier has striking but consistent differences," he explained.

The Grolier Codex is said to be the surviving pages of a 20-page ancient book, made of stucco-coated bark paper. The pages are said to be painted with typical Mayan iconography gods, warriors, slaves and hieroglyphs, and include a calendar charting the movement of the planet Venus.

"Our conclusion is based on the fact that any forger involved in tampering or falsifying papers such as this would be expected to make at least one error, and so in this case it is not the accuracy of Grolier that convinces us, but the absence of iconographic mistakes. Standards of knowledge that have only been available in such detail over the last few years for us to be able to conclude in this way," Professor Houston told Sputnik.

The Grolier Codex is said to have been discovered by looters in an Indian Jones-esque manner in Mexico in the 1960s.

It is claimed that alongside the damaged 20-page papers, the criminals also found a turquoise mask, a sacrificial knife, and some blank pieces of fig-bark paper which have also been authenticated by experts as original Mayan artefacts. But the Codex was doubted for a number of reasons, including wear and tear damage of the papers.

© Photo : Justin Kerr
(L) The feathered headdress on this figure identifies him with the spearing gods in the central Mexican Venus Tables. (R) A god with tear-drop eye and “Dick Tracy” nose holds a round object (perhaps a stone he is about to hurl) by one hand and a tied captive by the other.

The team of experts now say an early 20 century forger simply would not have been able to create such a convincing fake. One of the academic members of the research team, Professor Houston, who has also dedicated his life to the study of Mayan history went on to add:

"A reasoned weighing of evidence leaves only one possible conclusion: four intact Mayan codices survive from the Pre-Columbian period and one of them is the Grolier. Our decades of study bring us to the only confirmation that the manuscript, counter to such claims against it for so long, is in fact very real indeed!"

The team of experts involved in this reevaluation describe the Grolier Codex as not only "the most ancient of manuscripts from the Americas," but a truly bona fide survivor of one of the least understood eras of Mesoamerican history.

How's that for an epic piece of history — and it certainly sounds like the perfect plot for any remake plans for the Indiana Jones film franchise!