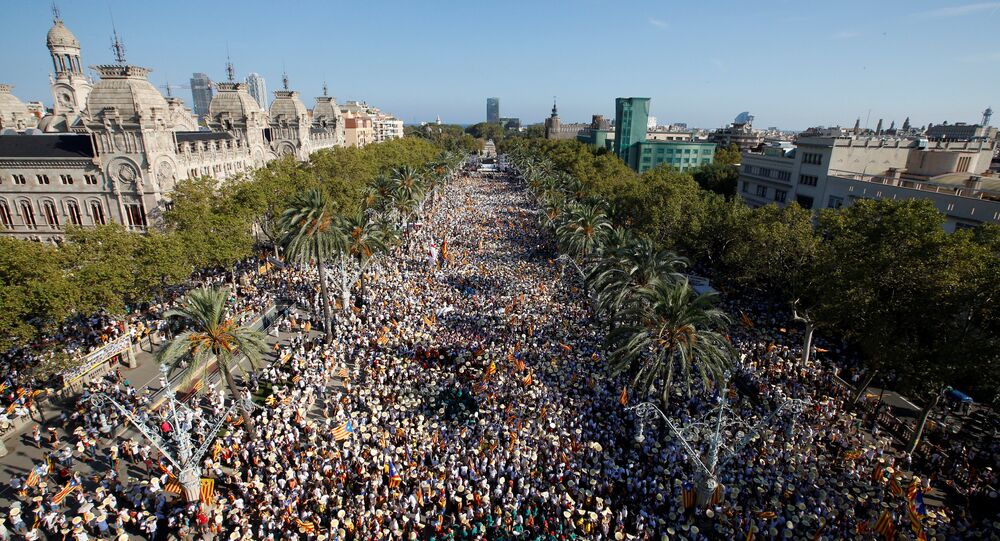 Up to 800,000 of people in five towns have gathered to call for speedup of separation of Catalonia from Spain, taking the movement to a new level.

© AP Photo / Manu Fernandez
Chain Reaction: Brexit Invigorates Pro-Independence Sentiments in Catalonia
Hundreds of thousands of Catalonians have gathered in five different towns of Spanish autonomous community to encourage the speeding up of the process of breakaway from Spain, to which central government is fiercely opposed, according to reports of local media.

According to Barcelona police, at least 540,000 people gathered in Barcelona, which has become the historical place for independence rallies. This year, however, the rallies gathered in four other cities, too, raising the total number of people to some 800,000.

"Each year we try to come up with something new… this year we wanted to show that Catalonia is a diverse country and we walked away from being focused on Barcelona," Natalia Estevez, vice-president of Catalan National Assembly, told RIA Novosti.

This year's rally coincided with a split among pro-independence parties, as they could not come up to a unanimous conclusion regardless post-secession plan.  Despite the fact that plan had been approved by a pro-independence majority in regional parliament, it was never enforced.

But Estevez believes these differences will not hamper the movement for gaining independence.

"We want to show the world that we are diverse, but united. We are a lively country, on the move, and we are standing on the threshold of turning into a new state," she said.

The regional pro-independence movement was trounced in parliamentary elections this year, when the government lost the support of the anti-capitalist party CUP who did not support the proposed budget plan.

Head of the regional government of Catalonia, Carles Puigdemont is now forced to run a minority government with 62 seats in the 135-seat regional assembly. Puigemont is going to face a vote of no confidence on September 28.

His position is that Catalonia should negotiate its independence with the central government, but declare independence unilaterally, if necessary.

"We have to move towards the final outcome," one of the participants of this year's Barcelona rally, a 58-year old clerk named Borras, told reporters. "We can't wait any longer."