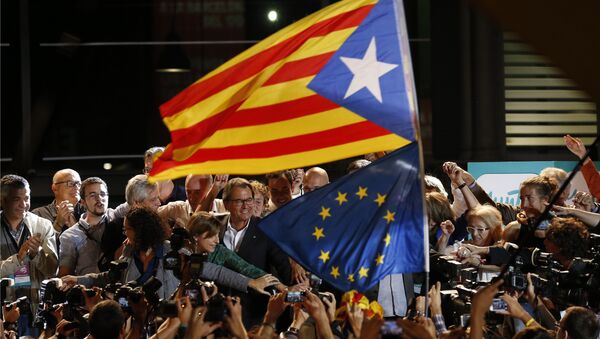 The number of pro-independence supporters in Catalonia is rapidly growing. Recent polls showed that there are now more people who are in favor of secession from Spain than opponents.

Catalonia Deadlock to Get Worse If People's Party Remains in Power
In an interview with Sputnik, Jordi Fabrega from political party "Esquerra Republicana de Catalunya" said that the current trend may be triggered by Britain's recent decision to withdraw from the EU as well as the victory of the Popular Party (Partido Popular) during parliamentary elections in Spain.

"Many Catalans voted for Podemos party which supports the right of the autonomy to carry out a referendum on its status. However, these expectations have not been met. As a result of re-vote, the Popular Party won even more votes than the first time," the politician said.

"The election results have strongly influenced the mood in Catalonia. The autonomy's residents realized that a constructive dialogue with Madrid won't work. Therefore, the only possibility is now — to create an independent state. The survey results clearly demonstrate this," he added.

Late June, Popular Party won the parliamentary elections in Spain. The PP has received 33 percent of all votes counted and thus — 137 seats in the 350-seat Lower House of Parliament.

According to the politician, people want independence because the Spanish government does not respond to their concerns.

"There is a feeling that they lost feedback aggravated by economic problems. Recently, Spain's public debt exceeded GDP. And there are no effective measures to get out of this situation being taken," Fabrega said.

In Fabrega's opinion, Brexit has also influenced the mood of residents of Catalonia, making them ask why others can solve the problem by means of a referendum, and they can't.

"The majority of Catalonia residents want to decide the fate of their autonomy by a democratic vote, and not unilaterally," the politician stated.

On June 23, the United Kingdom held a referendum on leaving the European Union. According to the final results, 51.9 percent of voters, or 17.4 million people, decided to support Brexit, while about 16.1 million opposed it.