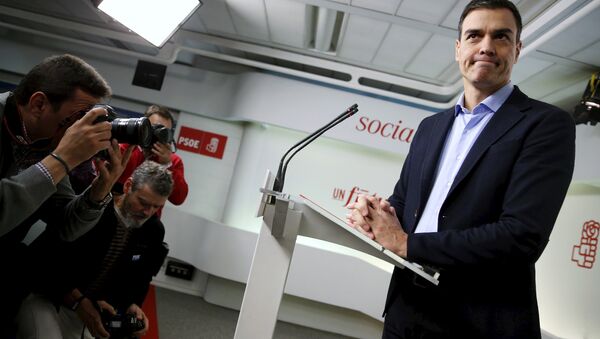 Pedro Sanchez, leader of the rival Spanish Socialist Workers’ Party (PSOE), said that he Spanish Prime Minister's office were to remain in the same hands, the situation with the Catalan deadlock will worsen in the coming years.

Later in January, Rajoy will face the first parliamentary vote on the re-assumption of his position as the country’s prime minister. Podemos, PSOE, and Ciudadanos parties have pledged to vote against him.

"If Moncloa [the Spanish Prime Minister's office] were to remain in the same hands, the situation with the Catalan deadlock will worsen in the coming years. Another four years of PP in Moncloa will not solve Spain's problems, they will exacerbate them," Pedro Sanchez said at a press conference.

Spain's Podemos Leader Refuses to Ally With Any Other Party
Catalonia has long sought independence from Spain, but the Spanish government has repeatedly declined the region’s quest for independence, saying it would violate the country’s constitution.

Sanchez added that he was trying to reach an agreement with Podemos and Ciudadanos to unlock the political crisis in Spain.

On December 20, Spain held general election that ended the established two-party system, in place in the country for more than 30 years. The conservative PP won 123 seats in the lower house of parliament but failed to gain an outright majority. The PSOE won 90, and Podemos secured 69 seats.