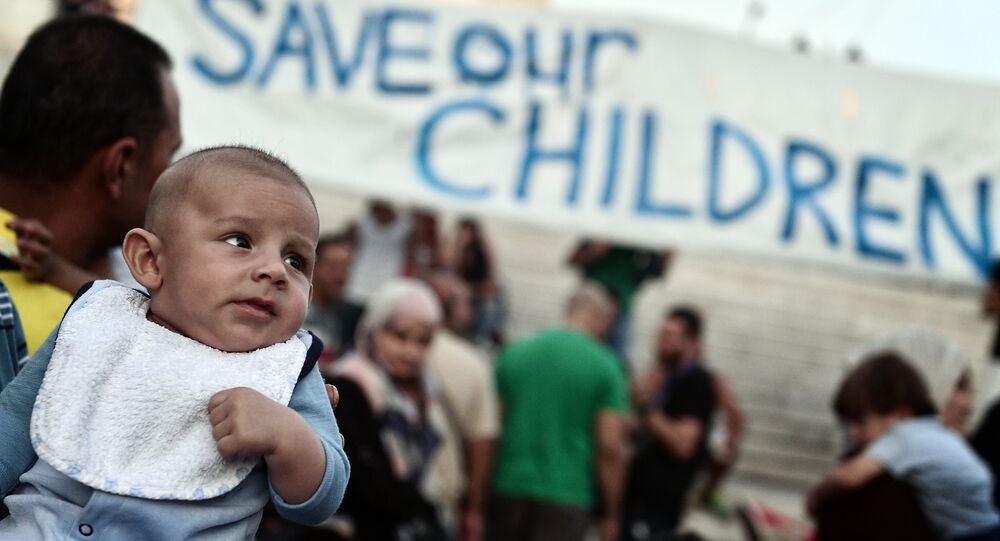 A year to the day since the latest plan to relocate migrants from Greece and Italy, a new report has found that children are living separated from their families in appalling conditions in Greece, sometimes with unrelated adults, where they have little access to basic care and services.

© AFP 2021 / Vladimir Simicek
Hungary Refuses to Take Other EU States' Responsibility for Migrants
The European Union agreed the latest plan to relocate 120,000 migrants from Greece and Italy on September 9, 2015. It was the second tranche in a total of 160,000 due to be processed in so-called "hotspots" in Greece and Italy and then relocated in EU member states, according to a quota system.

However, one year on, only 4,740 of them have actually been relocated because of disagreements within the EU over the relocation plans, with many — particularly in Eastern Europe — refusing to take in mass number of migrants amid rising Islamophobia.

A new report from Human Rights Watch (HRW) has found that Greek police routinely lock up unaccompanied children in small, overcrowded, and unhygienic cells for weeks and months.

The report, "Why Are You Keeping Me Here?: Unaccompanied Children Detained in Greece,"  is based on interviews with 42 children who were or had been detained, as well as visits to two police stations and two detention centers in mainland Greece.

Greece has a chronic shortage of space and detains children in so-called protective custody while they await space in the overburdened shelter system. Greek law says unaccompanied children may be detained for 25 days pending transfer to a shelter, and for up to 45 days in very limited cases.

Human Rights Watch found that children were often detained for longer than these already excessive periods, with an average stay of 40 days. A 16-year-old boy from Afghanistan who had been in police custody for 52 days, said:

"The situation is very bad…I feel alone here, far from my family, from my friends… I need to get out of this hell."

And a 15-year-old Algerian boy detained at the Amygdaleza detention center told HRW:

Many had fled violence and armed conflict, including in Syria, Afghanistan, and Iraq. A 16-year-old Kurdish boy from Iraq who was locked in a police cell, said he fled after Daesh ighters (also known as ISIL) captured his hometown of Mosul and executed his father. The children traveled on their own to Europe or became separated from their families in transit.

The HRW report said: "Greece's failure to provide accommodation for unaccompanied migrant children is a chronic problem. Greek authorities have acknowledged the issue, but done far too little to effectively address the lack of accommodation."

Hungary's Problem With Migrants and the Pig Head 'Thought Experiment'