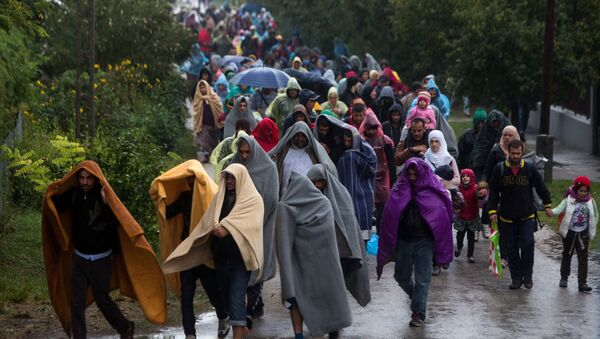 © AFP 2022 / Vladimir Simicek
Subscribe
Over the past year Hungary has been perhaps the only country to have complied with EU rules on the protection of borders, registration of migrants, according to the press office of the Hungarian government.

Vienna's Right Hopes to Reunite Austro-Hungarian Successors Within EU
MOSCOW (Sputnik) — Hungary will not accept responsibility for other EU states when it comes to migration and will not bear the consequences for their failure and non-compliance with the EU migration rules, the press office of the Hungarian government told Sputnik on Wednesday, dismissing threat of legal action by Austria.

Earlier in the day, Austria’s Interior Minister Wolfgang Sobotka said that Vienna would take Budapest to court if it refused to take back migrants who, under European rules widely ignored since last year, are due to seek asylum in the first EU state they entered.

"Hungary cannot and will not take responsibility for – or suffer the consequences of – the irresponsibility of other Member States (Austria and Germany) which have expressly encouraged non-compliance with the regulations, or for the failure of other Member States to fulfill their obligations and carry out associated tasks (registration of migrants). We shall consistently represent this position," the press office's statement given to Sputnik outlined.

Under the Dublin Regulation, the first EU country of entry should take responsibility for asylum applications. But since the 2011 European Court of Human Rights ruling that found conditions in Greece, which is one of the main points of entry for migrants in Europe, inhuman and degrading, almost all EU countries stopped returning asylum seekers there. Hungary meanwhile still insists that most refugees enter its territory from other EU states and should be sent back to Greece or Italy.

"Over the past year Hungary has been perhaps the only country to have complied with EU rules on the protection of borders, registration of migrants, etc… It is simply impossible for migrants from the Middle East or any other parts of the world to enter EU territory in Hungary before they have crossed another EU Member State," the government press office stressed.

Migrants' Return From Austria to Hungary to Top Bilateral Talks Agenda - Vienna
According to the Austrian Interior Ministry, there are approximately 5,000 migrants that have entered Austria from the Hungarian territory, and, as Vienna maintains, should now be taken back by Hungary.

Since 2015, when Europe faced a massive inflow of refugees, many EU states have introduced tougher measures on refugees and reinstated border controls.

On Tuesday, the Austrian government adopted emergency regulations that will be introduced once Vienna feels the number of asylum seekers entering the country becomes more than it can cope with.

Hungary is preparing for a controversial referendum on Brussels' plan to introduce migrant redistribution quotas on October 2.