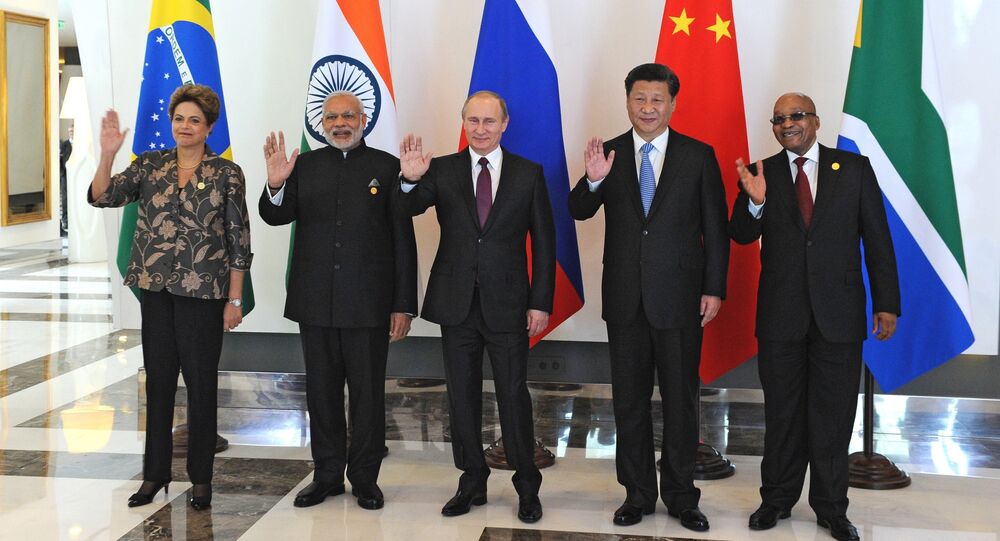 BRICS Could Give Up on the Dollar, But With ‘Dramatic Geopolitical Consequences’

The BRICS countries (Brazil, Russia, India, China and South Africa) remain potent players in the global market. Their economic potential is far from exhausted and the US dollar is already feeling the pinch, German economist Ernst Wolff told Sputnik.

“The countries with so-called “transition economies” are rich in human and natural resources, but this advantage is being used mainly by foreign companies, which take out raw materials and exploit these countries’ cheap labor,” Ernst Wolff said.

When asked whether it made sense buying shares in these transition economies, Wolf said that the securities markets of these countries no longer reflected the real economic situation there.

© REUTERS / Baz Ratner
Turkey May Soon Join BRICS Powers After Putin-Erdogan Meeting in St. Petersburg
“One should watch his step going there because these markets could be run by major players, which means that small-time investors have every chance to lose out,” Ernst Wolff warned.

Speaking about China, he said that drawing comparisons with the developed countries made little sense here. China is a major trading partner of 120 countries, while the US maintains active business ties with 70 countries.

“But China depends too much on exports and its economic growth on loans. Their securities market is manipulated even more than in Germany. Besides, they have problems in the real estate market and there are many other discouraging factors too. And still, China has come a long way the past few years and now probably equals the economic might of the United States,” Wolff noted.

When asked whether Russia was on the way to an economic rebound, he said that it certainly was.

“Russia defies any parallels with either Brazil of South Africa because it depends too much on the price of oil. However, it pursues a very sensible foreign policy ramping up trade with China and other countries thus improving its market situation,” Ernst Wolff noted.

“Brazil is going through its worst economic crisis of the past century. The country is in recession, real wages are in a freefall and unemployment is at a staggering 11 percent. The ongoing Olympics has somewhat masked all these social ills, but the economic reality remains very dismal anyway,” Wolff said.

Ernst Wolf said that the BRICS Bank was putting on muscle and that the US was becoming increasingly wary of this.

“The problem is, however, that the New Development Bank is working as part of the dollar system where the US Federal Reserve enjoys the exclusive right to print dollars. This is how the Americans have managed to bring the whole world to heel,” Ernst Wolff emphasized.

“This is something the Americans are trying to prevent. There have been attempts to break free from this dollar system. Saddam Hussein wanted to sell his oil for euros. Muammar Gaddafi wanted to introduce a gold denominated currency. Both these attempts fell though and their authors are dead. Which means that the Americans are ready to go at any length to keep this system intact,” Wolff noted.

He also warned about the “dramatic geopolitical consequences” of attempts to phase out the dollar.

“During their recent meeting Presidents Vladimir Putin and Recep Tayyip Erdogan agreed to trade in rubles and liras. This is a declaration of war against the US, just like what Saddam Hussein and Muammar Gaddafi did before. I’m intrigued to see what happens next,” Ernst Wolff told Sputnik.