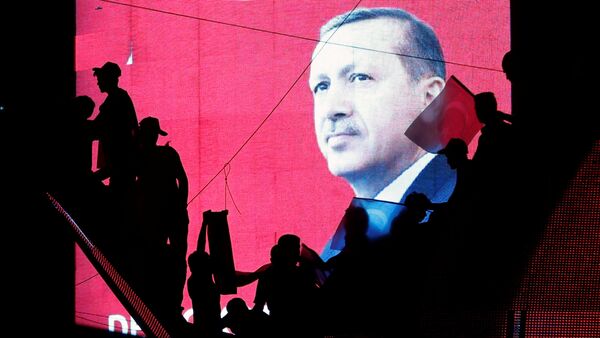 US analysts claim that Erdogan’s highly successful meeting with Putin in St. Petersburg could be the beginning of Turkey leaving NATO to join the BRICS.

"The question is this: Is Erdogan in the process of disrupting Turkey’s longstanding relations with the West, and the United States in particular, to throw his lot in with the BRICS?" US historian and political commentator Patrick Smyth said on Tuesday.

Erdogan apologized for the shooting down of a Russian bomber outside Turkish air space last November and the two leaders agreed on a series of measures to boost economic and other ties.

Putin and Erdogan Talks: Will Russia-Turkey Reset Spell the End of NATO, EU?
"My sources say a variety of deals in the energy, tourism, trade, finance, investment and defense spheres are to be negotiated," Smyth said.

Smyth noted the St. Petersburg talks are likely to mark a crucial step toward Turkey turning its back on the United States, the European Union and NATO and reasserting its identity as a non-Western nation.

"This is very possible and would begin a major disruption in US relations in the Middle East and beyond," he stated.

Smyth added that US President Barack Obama most likely will not be able to stop Erdogan from eventually leaving NATO.

University of Louvain philosopher and eminent political commentator Jean Bricmont said that Turkey is moving out of the United States and NATO camps and Putin is outplaying US policymakers in his dealings with Ankara.

"As the saying goes, the Americans play poker and the Russians play chess and this Turkish episode may illustrate this," he noted.

Turkey has traditionally been the closest and most reliable ally of the United States in the Islamic world.