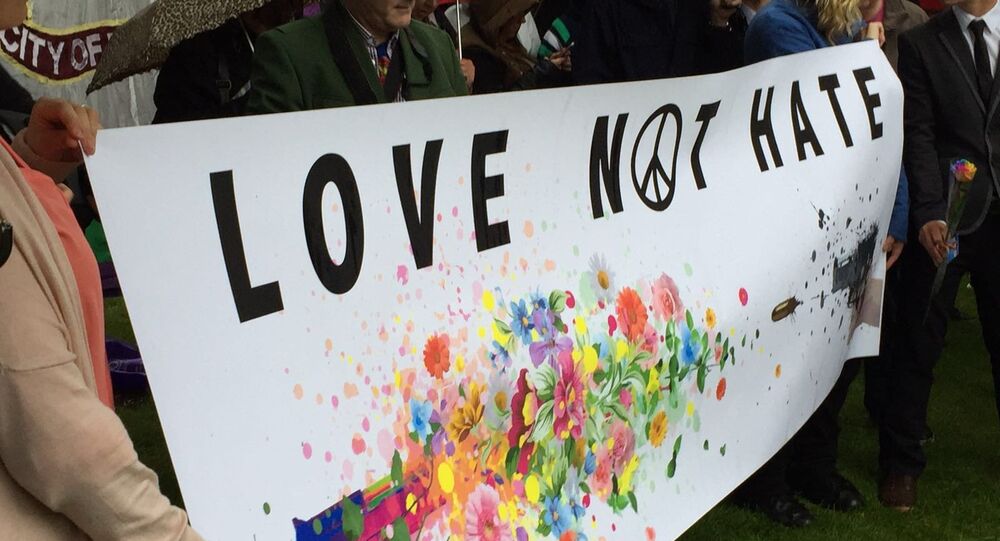 Under a grey Scottish sky thousands gathered in Edinburgh’s St Andrew’s Square on June 15, in a show of respect and solidarity for the victims of Sunday’s Orlando nightclub massacre.

© Sputnik / Sputnik
A Vigil of Unity: London Turns Up the Love to Support Orlando
It was an atmosphere of grief and pain, but also one of inspiration and solidarity. Some 3000 people from all walks of life stood shoulder-to-shoulder to express that "hate has no place here, love is love," as one of the opening speakers said.

The event was opened with an emotionally charged set of songs from the
Loud and Proud Choir and Edinburgh's Gay Men's Chorus, as a plaque containing the victims of the Orlando shooting was laid in front of the podium, moving many in attendance to tears.

​Following speakers from the local LGBTI+ community,
Unite Against Fascism, and Stonewall Scotland, Scotland's First Minister Nicola Sturgeon delivered a message of solidarity to those in attendance, and to members of the LGBTI+ community across the world.

"All across the world we have watched people come together in solidarity, and that is the comfort that I hope all of you, and members of the LGBTI community right across the world, take from these expressions of solidarity, and tonight is another such expression. We stand here tonight united, but we stand here proudly in defiance of hate and with a very clear message — that love, is love."

​Sturgeon highlighted Scotland's commitment to equality, and cited the passing of the Equal Marriage Bill as one of the most important moments of her career, but emphasized that the Scottish Government's work is not done:

"Until we live in a world where no young person feels hatred, fear, discrimination, or prejudice simply because of their sexuality or gender identity, then we have still got work to do, and I pledge to you tonight, that we will continue to do that work for every day that it takes to get to the point where we live in a Scotland that is truly equal."

Kezia Dugdale, leader of the Scottish Labour Party, told Sputnik that she was in attendance to pay her respects to the victims in Orlando, and to show her solidarity to the LGBTI+ community in Edinburgh.

"Loud and clearly that love will always defeat hate," she said, "Whether it's CC Blooms, or the Polo Lounge, or GAY, or any club around the world, it has to be a place for safety and a place of sanctuary. We have to redouble our efforts to fight for our rights, to create a safe place for all LGBTI+ people."

​Attendees came together in song and in friendship to send a clear message against homophobia and hate.

#OrlandoShooting vigil attendees on what it means to them to be in #Edinburgh tonight pic.twitter.com/1qaZWMFFzs

​This is one of several vigils across the UK this week, including in Glasgow and London. Scottish government buildings and local councils flew the pride flag at half-mast.

The #Pride flag is flying over St Andrew's House, Edinburgh in memory of those whose lives were taken in #Orlando pic.twitter.com/8av8W7Is1t

Orlando Massacre: Some Victims May Have Been Killed by Police

US Democrats May Push for Stricter Gun Control Amid Orlando Shooting