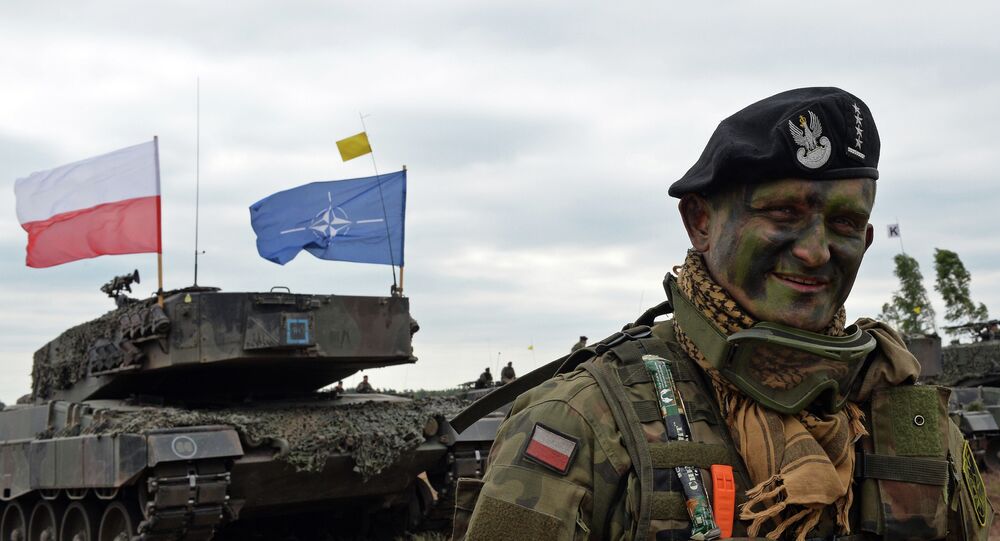 Poland is bracing up itself for war with “NATO classes” at schools and military-style family picnics held in the countryside as anti-Russian sentiment is heating up ahead of the upcoming NATO summit in Warsaw, Frankfurter Algemeine Zeitung wrote.

© Sputnik / Igor Zarembo
Poland Hardens Control on Border With Russia Ahead of NATO Summit
Divided as they may seem, Poland’s many political parties have always been one on the same page when it comes to patriotism and national security. One example of this is the recently enacted law, which paves the way for a foreign troop presence in the country, Joseph Croitoru wrote in Saturday’s issue of FAZ.

Against the backdrop of the conflict between Russia and Ukraine, Warsaw is demanding a greater NATO and US military presence in the country.

The unprecedented pro-NATO campaign being held in Polish schools  familiarizes the children with  details of NATO’s military operations abroad and with various aspects of its war on terror. The program also encourages school goers to decide how best to deploy a NATO military base in their particular region.

“It has also become customary in Polish schools to organize anti-Communist shows where schoolchildren use toys and sometimes even real weapons, albeit charged with blanks, as well as smoke guns,” the newspaper wrote.

Mock battles with imitation guns and period uniforms are even staged in small villages across the country where brave Poles fight “Soviet invaders” eventually “killing” them all.

“Military organizations are all too happy to  send their weapons experts to take part in such ‘battles,’” the newspaper wrote.

Poland's ruling Law and Justice Party has long advocated for NATO's greater presence in the country using the unsubstantiated claims of Russia's supposedly aggressive behavior as an excuse.