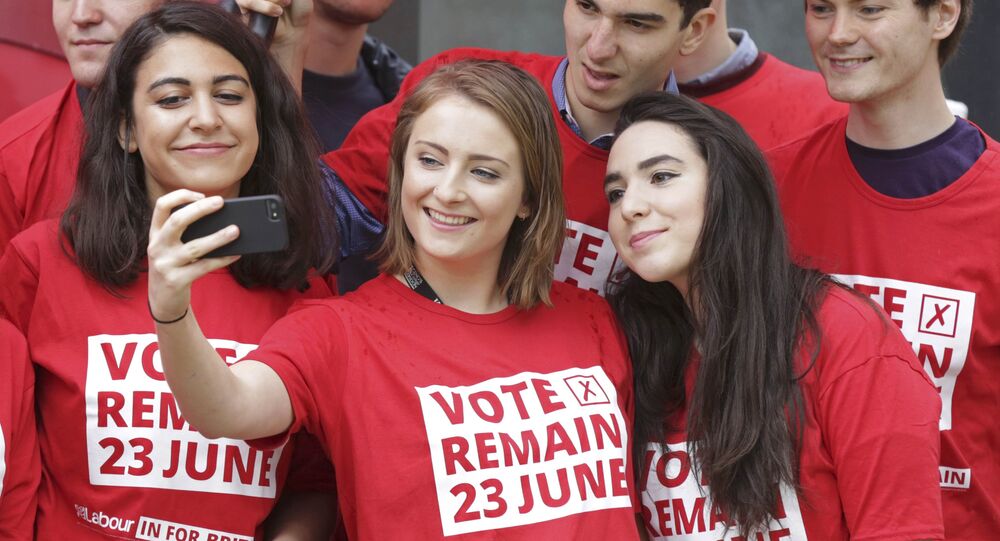 The EU Referendum is dominating the media across the UK and Europe, but is it really reaching the streets?

John Finnie MSP, a member of the Scottish Parliament for the Scottish Green Party, supports staying in the EU, but suggested to Sputnik that the campaign was lacking a grassroots presence: "I think it's fair to say that it's not at a frenzy, the bulk of the involvement has been media coverage rather than street activity."

There was perhaps no greater example of this than the supposed Stronger In event that was alleged to be happening outside the Scottish Parliament in Edinburgh Thursday (26 May), ahead of a debate on Scotland's future and the EU. Sputnik was at the parliament only to be told by observers that the "rally" had in fact been a small number of 6 — 10 Stronger In representatives, who arrived early, took a picture and posed for BBC cameras before quickly moving on.

Though for the 30 minutes before Scottish lawmakers began their debate on Scotland's future in the EU, this was the view…

I turned up at @ScotParl for Stronger In event this morning — it was realllly exciting. Half an hour of this… pic.twitter.com/lkrwuLZGx6

"I haven't really seen anything about it other than on the news. No one has spoken to me about it from either side. There aren't stalls or rallies."

A local student suggested that they felt it was really just about the Conservative party:

"It's not about the EU really is it, it's about Boris vs. Cameron, that's all I've seen."

There are no shortage of photos to suggest that the campaigns are reaching out to the general public, but they do seem to more prominent on the Leave side.

So looking forward to getting on the battle bus again! @vote_leave pic.twitter.com/kTxVGvMdam

John Finnie MSP and the Scottish Greens will be working over the coming weeks to present the positive case for staying in the EU, but not as an official part of the Stronger In campaign. This is not surprising given the difference in ideologies between the Greens and David Cameron's pro-EU Conservative colleagues.

Though perhaps the apparent lack of grassroots involvement in the campaign in Edinburgh is more representative of a wider lack of interest in the EU referendum in Scotland.

Could a Low Voter Turnout Hand the Campaign to the Brexiteers?

No Confidence Vote in Cameron Likely Only After Brexit Vote