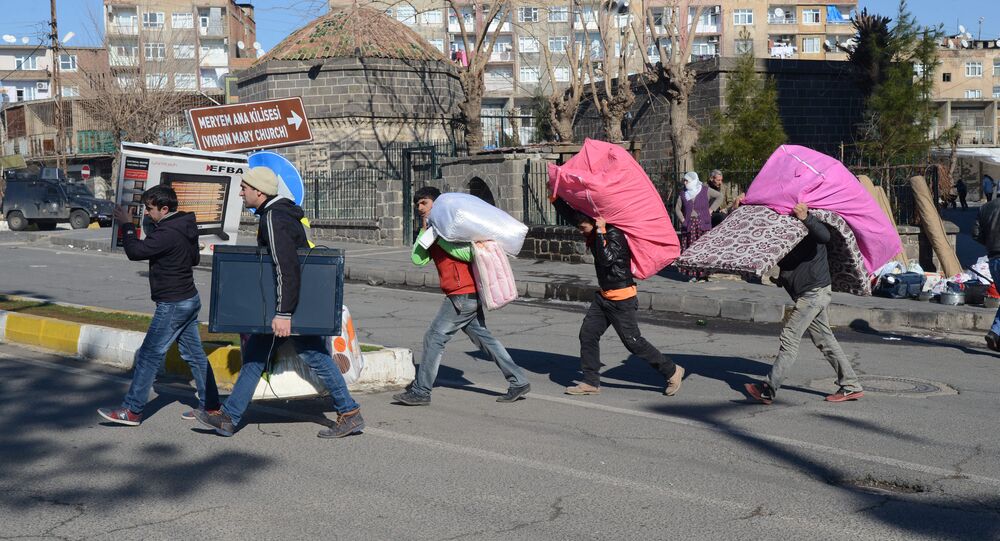 The EU's plans for visa liberalization with Turkey are an awkward attempt to stem the flow of refugees in Europe, but are nevertheless regarded as a triumph for Turkey. However, local Kurds in war-torn eastern Turkey keep warning the EU against the controversial deal with Ankara, whereas experts are planning for yet another influx of refugees.

© Sputnik / Ari Jalal
Gone Berserk: Norwegians Fight Daesh Alongside Peshmerga
At present, trouble is brewing in southeastern Turkey, an ethnically intricate region now turned into a warzone. Hundreds of people have been killed since Ankara launched a brutal crackdown on the militant Kurdistan Workers' Party (PKK) in Kurdish-dominated areas near the Syrian border.

Today, there are 300,000 Kurds internally displaced in Turkey, whereas over one million people in total have been affected by the clashes between the army and the rebellious Kurds, warned researcher Siri Neset of the Christian Michelsen Institute in Bergen, Norway.

"We look at the pictures from eastern Turkey and see war-like conditions in many cities, so it would actually be hardly surprising if many tried to seek asylum in Europe," Ness told Aftenposten.

© REUTERS / Marko Djurica
EU States 'Will Close Borders to Refugees' if Deal With Turkey Collapses
This grim forecast is shared by some members of the Turkish Parliament.

"The new refugee wave is going to come from here and not from Syria," Turkish MP Faysal Sariyildiz said to Aftenposten a month ago.

"It would be somewhat absurd if one first signed an agreement with Turkey assuming it was safe enough to send refugees back there, and then granted asylum to people being persecuted in the very same Turkey," Professor Erik Oddvar Eriksen at the University of Oslo noted.

"Disagreements over terror legislation in particular may topple the agreement on visa-free travel and thus even the entire refugee agreement," Siri Neset said, backed by Erik Oddvar Eriksen.

© REUTERS / Umit Bektas
Erdogan's 'One Man' Regime: Turkey 'Headed Down a Dead-End Path'
Should Ankara meet the EU's remaining demands, Turkish citizens with biometric passports may be given the opportunity of visa-free travel to the EU and Schengen countries by the end of June this year. According to the German tabloid Bild, only 1.3 million of 78 million Turks have biometric passports, whereas the rest must continue applying for a visa.

The Kurds are Turkey's largest ethnic minority, representing between 10 and 30 percent of the country's population. Hundreds of civilians have been killed or displaced since the long-running Turkish-Kurdish conflict was rekindled last summer.