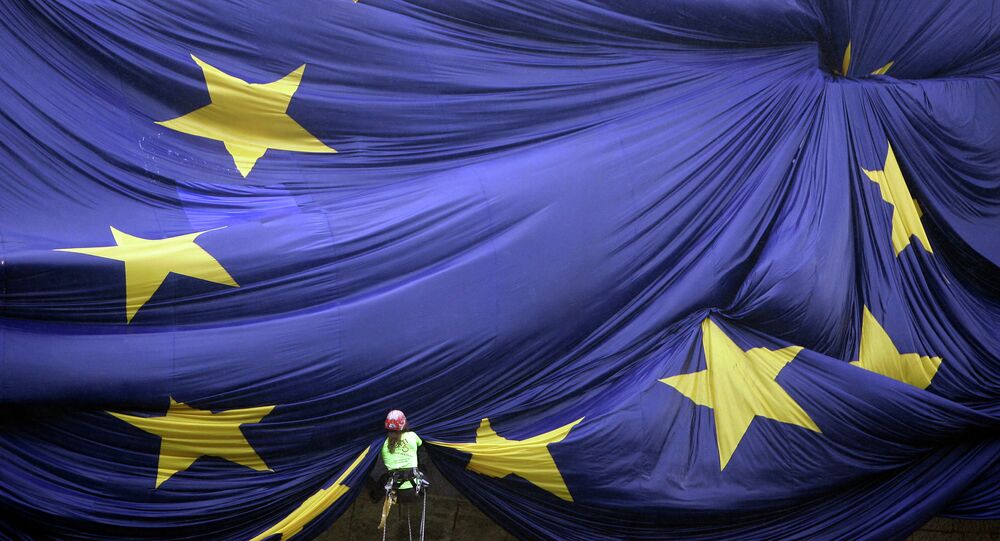 As the project for a united Europe continues to experience arguably the most serious political crisis since its inception, policy elites in Brussels are urging Europeans not to despair, to stay together, and to prepare for confrontation with Russia instead.

European Council President Donald Tusk is unsatisfied with the defeatist attitudes among Europeans. Speaking in Rome on Thursday on the 69th anniversary of the signing of the Treaty of Rome, which laid the foundations for the contemporary European Union, Tusk said that the EU's leadership is going to have to struggle with bouts of pessimism and discontent, which, in his words, now dominate the political landscape of the continent.

© Flickr / European Parliament
Euro Chief Tusk: The Idea of One European Union is an 'Illusion'
"The idea of one state, one vision…was an illusion," Tusk candidly admitted, adding that "our main duty is to protect Europe and its perhaps old-fashioned values, which include freedom, the rule of law, and liberal democracy, from ubiquitous pessimism and discontent."

Commenting on Tusk's words, Svobodnaya Pressa columnist Vasiliy Vankov suggested that despite its "ideologically innocuous-sounding" tone, and the fact that Tusk even left out some previously declared values, including 'multiculturalism' and 'political correctness', Moscow has little cause for optimism that Brussels is going to do its part to "temper the tone of the geopolitical confrontation between the West and Russia."

"Judging by the official's statements, Brussels plans to fight the old-fashioned way – updating the image of Russia as a potential enemy to all progressive forces in Europe," Vankov wrote. "Recently, Tusk warned that anti-Russian sanctions would stay in place until the full implementation of the Minsk agreements, even though any sensible European understands that they are being torpedoed by the Poroshenko administration, on Washington's insistence."

Since late last year, the journalist recalled, military equipment and NATO forces have been inching their way into the Baltic countries. This includes the 'Spring Storm' drills in Estonia, which kicked off at the beginning of the month and will run until May 20. "Apparently, this was part of the effort to rid our Baltic neighbors of their 'ubiquitous pessimism.'"

Speaking to the online newspaper, Boris Shmelev, the head of the Center for Foreign Policy at the Russian Institute of Economics, suggested that Tusk's priority is to cheer up the Euro-pessimists, whose rhetoric is becoming louder and louder.

It's Tusk's job, Shmelev said, "to show optimism regarding the prospects of European integration…even if everyone understands that united Europe is facing perhaps the most profound crisis in its history. An understanding of this fact is arriving at the public level and [developing among] nationally-oriented politicians. More and more statements are being made that the European Union has become obsolete."

The difficulties, in the analyst's view, have been brought on first and foremost by the migration crisis, with European officials responding with 'half-measures', such as the questionable $6 billion agreement with Turkey to keep refugees from entering the continent.

© AP Photo
EU Under Total Control? 'Merkel's Euphoria Towards TTIP Really Surprising'
The second reason for the crisis is the very logic of the European project itself, according to Shmelev: "The logic of European integration inevitably leads to the concentration of decision-making in a single center. But national elites in many countries do not want to give up their sovereignty to the European bureaucracy."

At the same time, the analyst noted, more and more Europeans are facing a demographic, economic, social and cultural crisis (including the loss of national identity), and "have come to view their national governments as an entity with intrinsic value, with whose help they hope to express and implement their interests."

The current crisis, he adds, has only been compounded by US efforts to push through its Transatlantic Trade and Investment Partnership (TTIP) initiative, "which would factually constitute a hostile takeover of the European market by American corporations. I think that Washington will push this agreement through, using the widest possible arsenal of tools at its disposal."

One of these tools, used by both Washington and Brussels, is the straw-man propaganda of a 'threat from the East', i.e. from Russia. This is taking place, "even though the Europeans are trying to fight back. It's not by chance that 55 of 98 lawmakers in the French National Assembly recently endorsed a resolution calling on the government to come out against anti-Russian sanctions. In other words, the desire to rebuild ties with Russia has already been articulated at the political level."

"A similar position has been taken by the Alternative for Germany Party, the French National Front, the leaders of Austria, Hungary and several other countries. Even if the Euro-Atlantic powers that be do not allow Marine Le Pen the presidency, her party is likely to take second place, which will have a major impact on political decision-making in the Fifth Republic."

© AFP 2021 / Michael B. Thomas
Neocons Make Trump Sound Like Peacenik on Foreign Policy
As far as Moscow is concerned, Shmelev stressed that at the moment, Russia's "ability to influence economic and political processes in Europe are minimal. We do not have the necessary economic, political, or informational leverage. Also, we should not underestimate the Euro-Atlantic ties that bind. Whatever Donald Trump says, he is unlikely to stop NATO's expansionist impulse toward the East. The American elite will simply not allow him to do so, particularly since in the US political system, not everything depends on the president."

For his part, Ajdar Kurtov, the chief editor of the 'Problems of National Strategy' journal at the Russian Institute for Strategic Studies, warned that the crises and potential crises, including the migrant quota crisis and the threat of the TTIP, may eventually lead to governments to conclude that "if it is impossible to bring order among the discord…it may be simply be easier to simply close the door" on the EU project.

So far, "all the challenges that have emerged in the EU have been responded to with one answer: to squander accumulated national wealth. But this cannot last forever."

Asked whether Moscow can play a role in helping Brussels get out of the crisis, Kurtov lamented that unfortunately, this doesn't seem likely.

"I am a pessimist in this regard. After all, we had repeatedly offered an agreement on the establishment of a unified and indivisible European security zone. We attempted to help solve the problem of energy security in southern Europe (via the 'South Stream' project). Instead, on the eve of the 'great migration', which may yet absorb them as it did the ancient Romans,' [Brussels] pumped NATO equipment into the ports along the Baltic, while authorities in Sweden and Finland talk about the urgent need to join NATO. Gentlemen, you are fighting with windmills!"

© Sputnik / Ramil Sitdikov
Lavrov: Russia Still Ready to Construct Gas Pipeline to South Europe
Ultimately, Kurtov says that he is concerned by the continued anti-Russian pathos among elites in Brussels for another, far more serious reason.

"War, as history has shown, often becomes one of the ways out of a political and economic crisis. Of course, as always, the profits will be reaped by Washington, but Europe in its docility and irresponsibility seems to be prepared to serve as the cannon fodder. Washington is pumping up anti-Russian hysteria on purpose, in order to control the Europeans' behavior, to make them feel a sense of anxiety and alarmism."