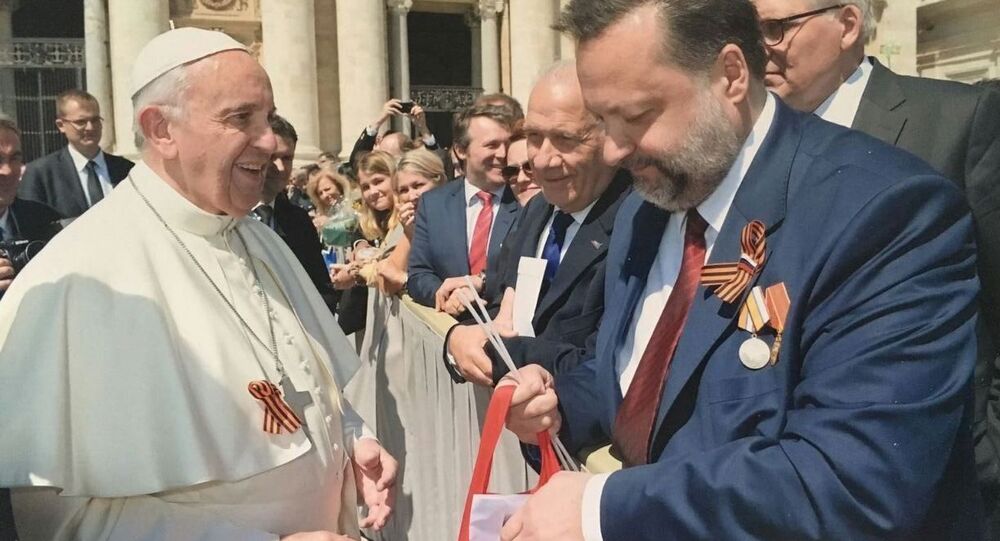 A Communist member of the Russian parliament has congratulated Pope Francis on the upcoming Victory Day and presented the Pontiff with a St. George ribbon, a widely recognized military symbol in Russia.

“Yesterday I had an opportunity to attend a papal audience on St. Peter’s Square in the Vatican,” Pavel Dorokhin told RIA.

“They put me in the front row in the VIP box. I told the Pope that with Victory Day now five days away I wanted to present him with a medal commemorating the 70th anniversary of our great victory over Nazi Germany. I told him about the 26 million lives our people sacrificed during WW2 and asked him to put on a St. George ribbon in a sign of solidarity with our people. The Pope attached it to his robe and we talked on,” Dorokhin added.

The deputy said that when he came up to the Pontiff, His Holiness greeted him a Russian “Khristos Voskrese!” (Christ Is Risen!)

© Sputnik / Grigoriy Sisoev
St. George Ribbon Should Be Treated Alongside Russia's National Flag
“The Pope congratulated me with Easter… I also handed him a magazine with the photograph of our Patriarch Kirill and told him how happy we were about their recent historic meeting. The Pope sent his blessing to our country,” Pavel Dorokhin said.

The Communist lawmaker handed Pope Francis a replica of the Victory Banner and thanked him for his solidarity with the Russian people.

On May 9 Pavel Dorokhin will personally meet with former Pope Benedict XVI.

“They told me he wants to meet me precisely on May 9. Being German, he still remembers that period,” Dorokhin added.

The St. George Ribbon campaign, held in celebration of the 1945 Soviet Victory in the Great Patriotic War, has been held in Russia since 2005.

The St. George ribbon, worn to commemorate the Soviet Union's victory over Nazi Germany in World War II, was first introduced in the 18th century as the highest military decoration for valor.