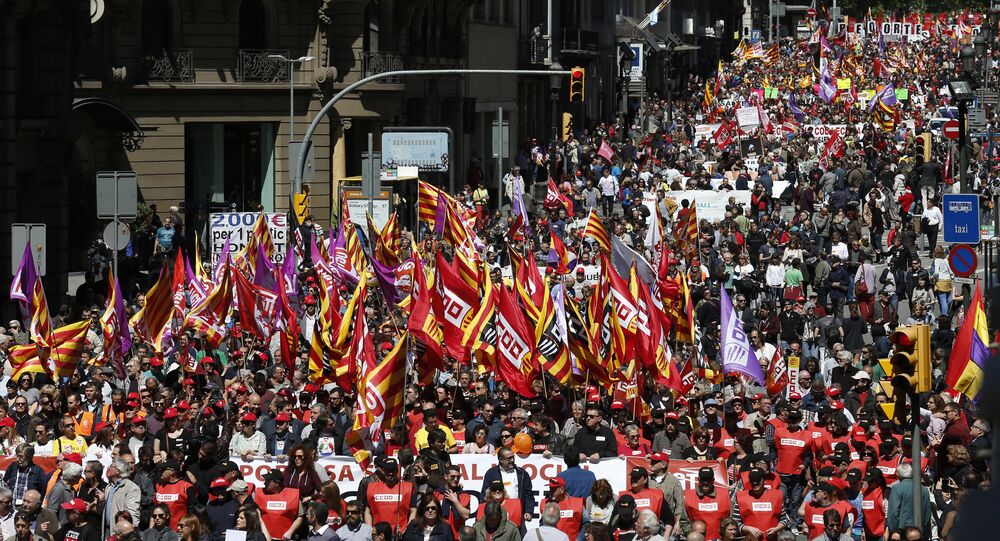 A total of 76 demonstrations with tens of thousands of people were held in Spain, with few of the rallies in Madrid.

© REUTERS / Benoit Tessier
Paris Labor Rallies Get Brutal, Protesters Clash With Riot Police
Madrid (Sputnik) — Tens of thousands of people across Spain are taking part in an annual May Day demonstrations on Sunday, calling for government to improve working conditions, higher wages and fight with unemployment.

A total of 76 demonstrations are being held in the country, with few of the rallies are taking place in the capital. The biggest event was organized by the General Union of Workers (UGT) and Workers' Commissions (CCOO) in Madrid, where thousands of people marched through the city center. The slogan of the demonstration was "Against the social poverty and low salaries. Work and rights." During the UGT and CCOO rally in Barcelona the organizers have promised to hold a general strike at the end of 2016 or early 2017.

© Fotolia / Yuge17
Over 30,000 People Join May Day Rally in Tokyo
No major incidents or unrest have been reported so far during the demonstrations.

From 2008 through 2012, Spain experienced a deep recession and the worst unemployment rate in the eurozone. Although Spain's economy began to recover in late 2013, the economic situation in the country is still described as severe. The European Union's fiscal rules forced the Spanish government to adopt an austerity program in 2012 aimed at slashing the level of its budget deficit to 3 percent by 2016. As a result, the government has cut down public services and social expenditures sparking public unrest.

May 1st: How the Idea of International Workers' Day Was Betrayed in the US