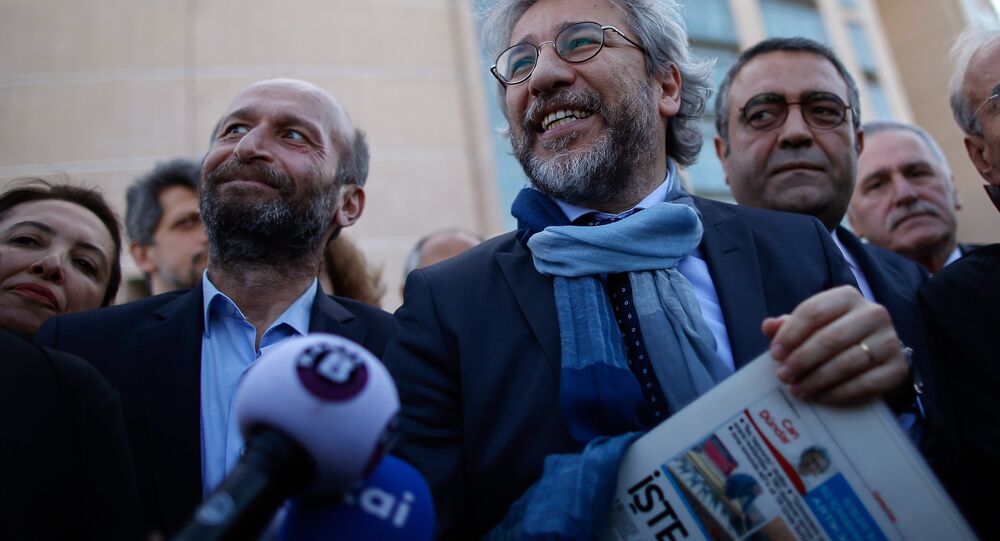 The lawyer of two journalists recently arrested in Turkey on charges of "insulting religious values," Bülent Utku, said he will move for a new trial and, if necessary, take an appeal to the European Court of Human Rights.

The barrister stressed that he will first send an official request for an appeal to the Supreme Court, then — to the Constitutional Court and, if necessary, to the European Court of Human Rights.

"In accordance with Article 11 of the Law on Mass Media, […] my clients can't be held responsible for other articles and images published in the newspaper, besides their own columns. We are going to appeal," Utku told Sputnik.

Columnists Ceyda Karan and Hikmet Çetinkaya have been charged with "insulting religious values" and "inciting people to hatred and enmity" after publishing a caricature of the Prophet Muhammad from the French satirical weekly Charlie Hebdo.

The court found them guilty and sentenced both to two years imprisonment. After the announcement of the court's decision Karan tweeted: „Let this two-year prison sentence will be our gift to liberal fascists".

In January last year, Cumhuriyet already reproduced some cartoons released by Charlie Hebdo as a sign of solidarity after the terrorist attack.

© AP Photo / Omer Kuscu
US Must Put Pressure on Turkey to Stop Crackdown on Reporters - Journalists
Karan and Çetinkaya, for their part, used small versions of the most controversial caricature of the Prophet Muhammad which has caused global resonance.

During her testimony, Karan explained that she was guided by such notions as professional honor, ethics, solidarity and respect for human values when publishing the cartoon in her article.

In an interview with Sputnik, Karan also stressed that the court's decision has been of a "political nature."

"The freedom of speech and expression covers the publication of any articles or pictures that do not carry with them an offensive sense or incite to violence. In a country where the legal system is based on a secular basis, this can't be seen in another way," the journalist said.

At the same time, the other newspaper's columnist Cetinkaya, speaking during the court, said: "I spent 50 years speaking defending democratic values and freedoms, the right for free expression. I totally deny the charges against me."

"My colleagues and friends know what views I have. I am not afraid to fight for the truth. I was guided by the voice of conscience when posting this cartoon. This caricature has cursed and condemned terrorism in France. Terrorism is a crime against humanity. It has no religious or ethnic affiliation. Any terror, be it right or left, is always a terror, and it can't be justified," the journalist said.

© Flickr / Penn State
Turkey Ignores Int'l Obligations by Deporting Russian Journalists - Russian Ombudsman
Turkey's crackdown on numerous journalists and restrictions on freedom of speech have been severely criticized by the international community, but so far the situation has not changed for the better.

In November 2015, Turkish authorities arrested two other journalists from the newspaper Cumhuriyet, Can Dundar and Erdem Gul, after they published an article bringing to light Turkey's MIT arms deliveries to Syria.