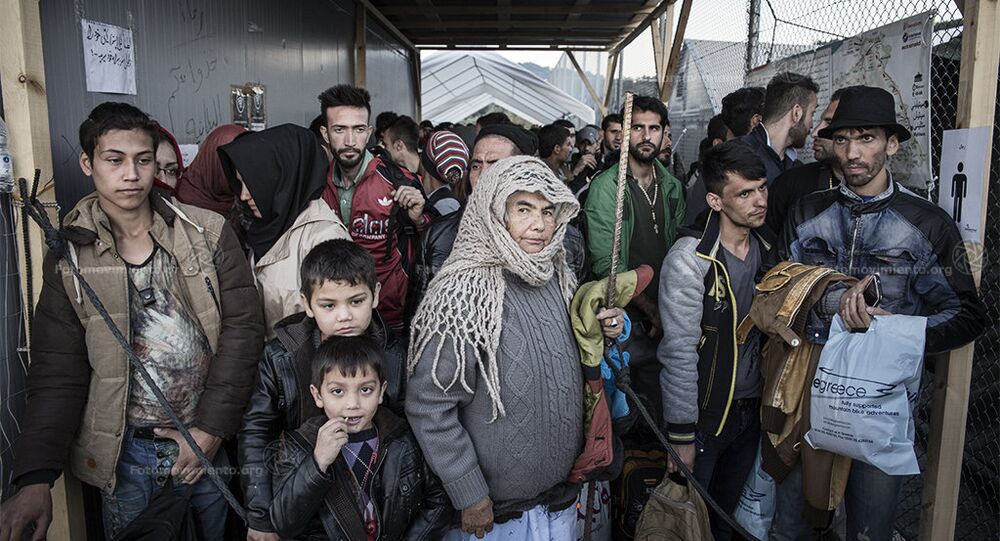 Amnesty International and Oxfam have said the decision to close the Western Balkans route has left more than 46,000 refugees and migrants in "appalling conditions" and that the 'hotspots' where they are processed "spread fear and doubt," Sputnik has been told.

The EU reached a deal with Turkey, whereby migrants arriving in Greece after March 20 are being processed in 'hotspots' from where migrants deemed "irregular" — not meeting the requirements for asylum — are dispatched back to Turkey in return — on a one-for-one basis — for a Syrian refugee being relocated from Turkey to EU member states. The deal includes an agreement that all Turks will be allowed visa-free access to EU members states by June 2016.

Many relief agencies — including Médecins Sans Frontières, the International Rescue Committee, the Norwegian Refugee Council, Save the Children and Red Cross — have joined the UN Refugee Agency UNHCR in saying the EU-Turkey deal is either immoral or illegal as the 'hotspots' have become detention centers. They also say Turkey is not a 'safe country' for migrants to be returned to, under the Geneva Convention.

The Amnesty International report, 'Trapped in Greece: An Avoidable Refugee Crisis', examines the situation of refugees and migrants — the majority women and children —trapped on mainland Greece, following the complete closure of the Macedonian border on 7 March.

"The decision to close the Western Balkans route has left more than 46,000 refugees and migrants in appalling conditions and in a state of constant fear and uncertainty.

"EU States have only exacerbated this crisis by failing to act decisively to help relocate tens of thousands of asylum-seekers, the majority of whom are women and children, trapped in Greece.

"If EU leaders do not act urgently to live up to their relocation promises and improve conditions for stranded refugees and migrants, they will face a humanitarian calamity of their own making," John Dalhuisen, Amnesty International's Director for Europe and Central Asia told Sputnik.

Of the 66,400 asylum-seekers pledged to be relocated from Greece in September 2015, only 615 had been transferred to other EU member states, according to information published by the European Commission on 12 April.

"The conditions here are not good and we are sleeping on the ground; our blankets are soaked with water. There are no bathrooms. This is why people are getting sick," a Syrian woman who was nine-months pregnant told Amnesty International at a makeshift camp in Idomeni.

Meanwhile, Oxfam has said the EU response to the Mediterranean tragedy leaves vulnerable people in "legal limbo." It said people are continuing to arrive in Italy via the Mediterranean and the death toll remains high. Numerous concerns have been raised about the way these hotspots function and the potential violation of people's right to claim asylum, it said.

"The conflicts, abuses, and abject inequality that drive people from their homes, the dire conditions on the routes that lead to Libya, and the further dangers people on the move face as they seek passage to Europe lead many to experience severe trauma," Oxfam said.

"The United Nationsal Support Mission in Libya has noted that migrants detained in Libya often face torture, beatings, and forced labour. Recently four were shot dead and 20 wounded while trying to escape a detention centre."

Not My Problem: UK 'Turns a Blind Eye' to Europe's Migrant Crisis