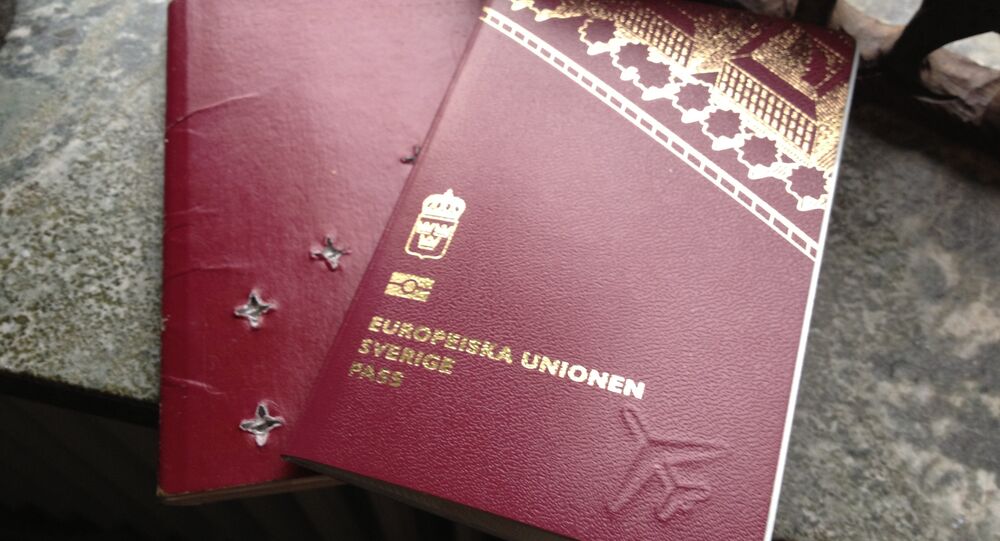 Starting from April 15, Swedish citizens may get a maximum of three ordinary passports for five years. The regulations have been tightened to reduce the abuse of "lost" and "stolen" passports.

© AFP 2020 / TT NEWS AGENCY / ERLAND VINBERG
In Through the Out Door: Immigrants Entering Sweden via Øresund Tunnel
In light of alarming reports that "missing" and "stolen" Swedish passports have been abused by asylum seekers, criminals and terrorists, the Swedish parliament finally decided to take action. In the past, individuals could apply for up to 18 new passports, but the new regulations limit the number of ordinary passports to three.

In 2013, a staggering 177,000 Swedish passports were lost, stolen or missing. According to an investigation by the Ministry of Justice, a total of 1,441 had five or more passports issued, whereas one person received no less than 18 passports.

© Flickr / Ian Packer
Double Trouble: Sweden Launches Crackdown on Terrorism Amid Soaring Crime
The same study concluded that there is a risk that Swedish passports have been used by people with intent to commit terrorist crimes. Every year around 950 cases of abuse of Swedish passports are recorded, whereas a fresher report by the Ministry of Justice revealed strong indications of a large number of unrecorded cases. "We deem the risk of Swedish passports being put for sale as too great," Interior Minister Anders Ygeman observed.

Furthermore, the report noted a random check at the Arlanda airport of Stockholm had revealed that the majority of people who had used Swedish passport to travel to Sweden were Syrians, arriving from Turkey, where they had bought Swedish passports off traffickers.

As early as in 2014, Jenny Nordberg of the newspaper Svenska Dagbladet, claimed that Swedish passports were selling like hot cakes on the black market of Istanbul in Turkey.

Nordberg noted that the supply of the Swedish passports was rather good and blamed the situation on the Swedish authorities and embassies being far too generous in handing out new documents for all citizens who claim to have lost their passports.

"Some extremely careless Swedish citizens have lost their passports like ten times in a row and then retrieved ten new passports within a few months, according to the police," wrote Nordberg.

According to her, the common approach for illegal migrants is to get hold of a Swedish passport, enter the EU, arrive straight to Sweden, dispose of the used passport and claim to be a Syrian refugee. Nordberg asked around at the bazaars of Istanbul and the demand for Swedish passports turned out to be even higher than for American green cards. A 2015 estimate by Dagens Nyheter revealed that a single Swedish passport can fetch as much as 100,000 Swedish krona (12,500 dollars).