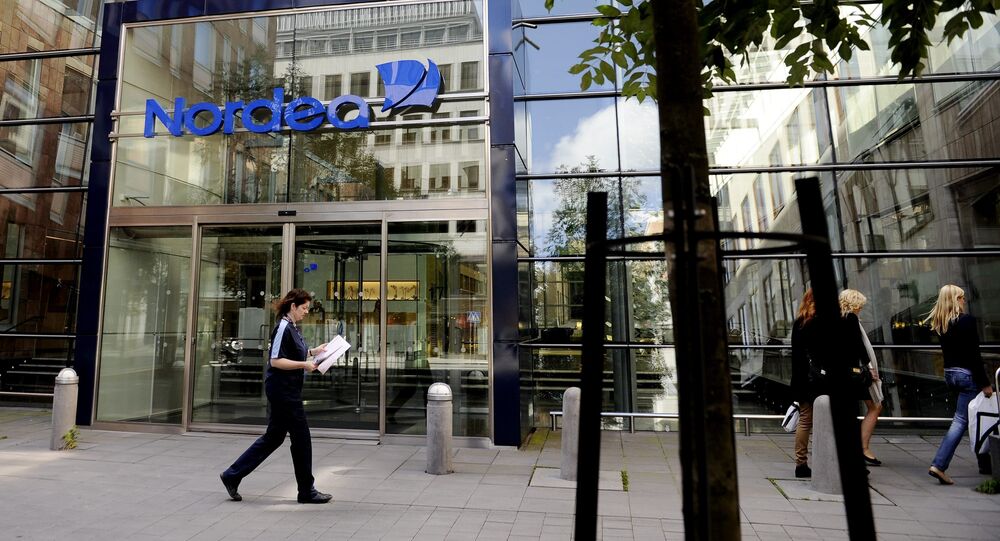 Nordea, one of the biggest banks in Scandinavia, has been accused of offering tax evasion schemes to affluent customers, an international investigation into the leaders, criminals and celebrities' secret use of "creative" offshoring shows.

Nordea is named in The Panama Papers, a huge cross-border journalistic collaboration that has been scrutinizing an international law firm based in Panama in an attempt to combat high-profile tax evasion.

Biggest Ever #PanamaPapers Data Leak Reveals Offshore Firms Linked to World’s Most Powerful People
Headquartered in Stockholm, Nordea Bank AB, is a Nordic financial services group operating in Northern Europe. The bank is the result of the successive mergers of the Finnish, Danish, Norwegian and Swedish banks. Recently, the bank was listed alongside around 500 other banks or subsidiaries including banking heavyweights such as HSBC, UBS and Société Générale, as creating offshore companies through the Panama-based legal company, Mossak Fonseca. The Panama Papers also lists Jyske Bank, Denmark's third largest bank, along "professional clients" of Mossak Fonseca.

Overall, Nordea is featured in almost 11,000 matches in the database, as stated by Sweden's national broadcaster SVT. The Panama Papers feature other Swedish banks as well, albeit on entirely different levels: with Swedbank, Handelsbanken and Carnegie peaking at around 700 matches.

"Tax evasion is a crime and it is totally unacceptable," Sweden's Finance Minister Magdalena Andersson told Expressen in a commentary on Nordea.

© Flickr
Decline and Fall: Finland's National Debt Beyond 1990s Crisis Level
Speaking to SVT, Thorben Sander, CEO of Nordea's Luxembourg division, where many of the tax deals are understood to have been facilitated, confirmed that the bank had helped customers to create secret 'letter box' companies in tax havens.

In Sweden's neighbor states, the revelation stirred up a much tougher reaction. Brian Mikkelsen, tax spokesman of Denmark' Conservative Party, went so far as to accuse Nordea of "daylight robbery."

"Hard-working Danes are being cheated through dealing with shady companies in Panama. Even though taxes are high here at home, they must be paid," he told the national TV-channel TV2.

"I am shocked that Nordea has been dealing with these straw-man companies. There is no doubt they know what they are doing," Lars Koch, a tax haven expert who and the political head of the non-profit organization Ibis, told DR Nyheder.

© Photo : Pixabay
Oil on Troubled Waters: Unemployment in Norway Goes Up
At the same time, Finnish tax haven researcher Matti Ylönen told the Helsinki daily Hufvudstadsbladet that Nordea's tax haven scheme was not a surprise to him. By his own admission, Ylönen believes the Nordic banking company in fact uses tax shelters to an even greater extent than the leaked data suggests.

All in all, between 400 and 500 Swedish companies and individuals were featured in the Panama Papers, according Sweden's national broadcaster SVT. So far, however, no Swedish politician's name has yet surfaced, unlike Iceland, whose PM Sigmundur Davíð Gunnlaugsson notoriously walked out of an interview with Swedish television company SVT, after he was asked about his and his role in off-shoring. Gunnlaugsson accused the SVT journalists of asking "totally inappropriate" questions.