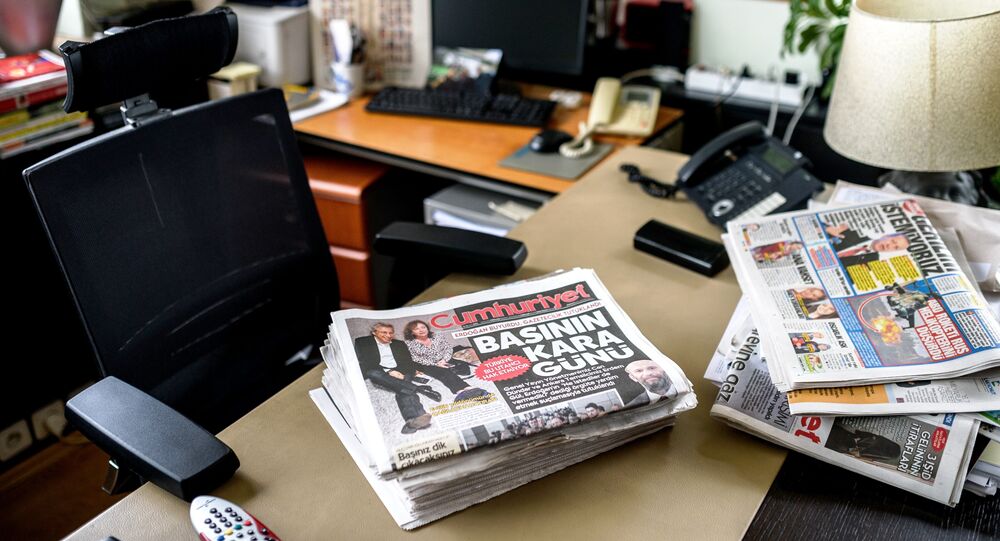 Turkey's recent crackdown on press freedom has sparked diplomatic tension with some of the country's Western allies, with Turkish officials reacting angrily to recent criticism of Ankara's approach to media regulation.

Following the first day of the controversial trial of Cumhuriyet newspaper journalists Can Dundar and Erdem Gul, a number of Turkish officials were left angered by comments and social media posts from a number of international diplomats present at the case.

A number of foreign diplomats took to social media with messages of support and solidarity for the pair, who are potentially facing multiple life sentences on charges of espionage and divulging state secrets, after publishing a story claiming that Turkey was delivering weapons to Islamist rebels in Syria.

Among messages that generated the most controversy was a Twitter post from British consul Leigh Turner, who posted a picture of himself and Dundar with the hashtag #freedomofexpression.

With #Cumhuriyet journalist Can Dundar before opening of trial today #frredomofexpression pic.twitter.com/WgHAiyTVMd

Turkish Justice Minister Bekir Bozdag also took to Twitter to slam the "unacceptable" conduct of some foreign diplomats present at the trial, accusing some consuls of "exceeding their authority."

"Turkey is not a colony: Turkey is an independent and strong state. Turkish courts and Turkish judges are independent," he said.

This was followed by criticism from Turkish President Recep Tayyip Erdogan, who lashed out at Turner's selfie with Dundar.

"The chief consul of a country stands up and goes to a trial of a journalist facing espionage charges," Erdogan said, as quoted by the state-run Anatolia news agency.

"As if it is not enough, he then takes a picture with him grinning ear-to-ear and posts it," he added.

"It is for Turks to decide what kind of country they wish to live in."

The verbal barbs continued with Erdogan offering a thinly-veiled criticism of the British consul, accusing some diplomats of using "expressions that overstep their boundaries."

"Elsewhere, such diplomats who display such behavior would not be hosted for a single day."

In a sign of the international concern surrounding Turkey's recent crackdown on the country's media, the UK's Minister for Europe, David Lidington had previously supported consul Turner's attendance at the trial, saying that it was an "important case for freedom of media in Turkey."

The criticism is part of a growing list of concerns directed towards Ankara, with many western allies concerned with the Erdogan government's attitude to national media, opposing voices being suppressed, and reports of anti-government journalists being intimidated by officials.

Along with the treatment of journalists Dundar and Gul, there is also concern over the handling of the ongoing trial, after many were left angered when it was announced it would be taking place behind closed doors, citing "national security" concerns.

International free press organizations have been vocal critics of the Erdogan government, with Turkey ranking 149th out of 180 countries in a 2015 press freedom report published by Reports Without Borders.