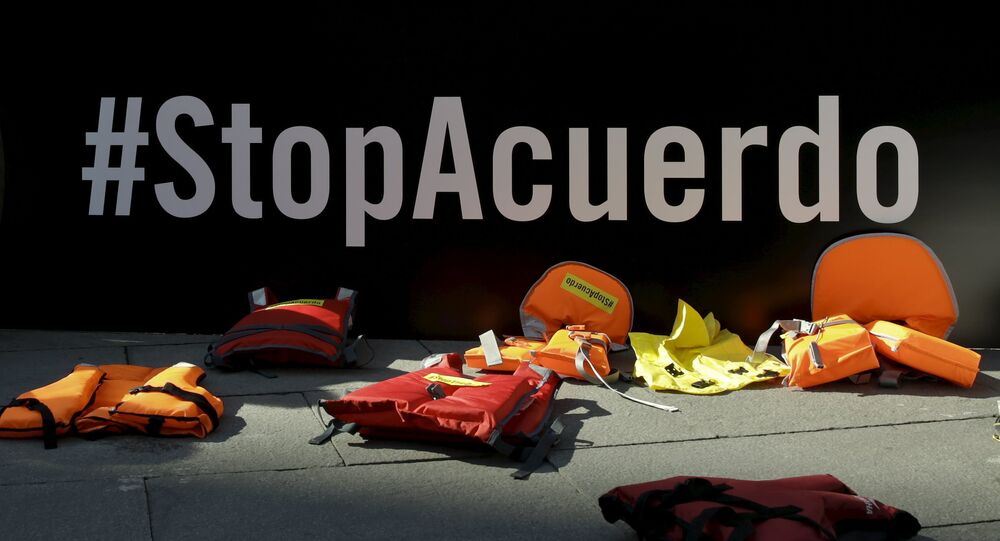 Thousands of Spanish citizens gathered in over 50 cities across Spain to protest against a refugee plan between Ankara and the European Union to stem the flow of migrants to the bloc, a day ahead of the start of EU leaders' talks on Thursday, media reported.

MOSCOW (Sputnik) — At least 16 human rights organizations and 5,000 residents rallied in Madrid on Wednesday, on the eve of the March 17-18 European Council summit in Brussels, during which EU leaders are expected to sign a final agreement with Turkey.

© AFP 2021 / Bulent Kilic
Eleventh Hour Crisis Talks as EU-Turkey Refugee Deal Set for Failure
Municipal authorities in Barcelona and a number of other cities ordered EU flags to fly at half-mast in opposition to the EU-Turkey deal, according to Spain’s Europa Press news service.

In total, over 120 human rights associations participated in the nation-wide rally in Spain, having deemed the draft pact on refugees illegal, as it would result in the violation of human rights by carrying out mass deportations of refugees to Turkey.

On Wednesday, Spanish lawmakers and the country's foreign ministry agreed to reject Brussels’ preliminary deal with Ankara in its present form, demanding that it be amended to comply with international law and respect for human rights.

The EU-Turkey action plan envisions a one-for-one exchange of undocumented migrants in the bloc for approved Syrian refugees in Turkey, as well as for the acceleration of Turkey’s EU membership bid, visa liberalization talks and the allocation of 6 billion euros ($6.6 billion) to Ankara for refugee projects in Turkey.