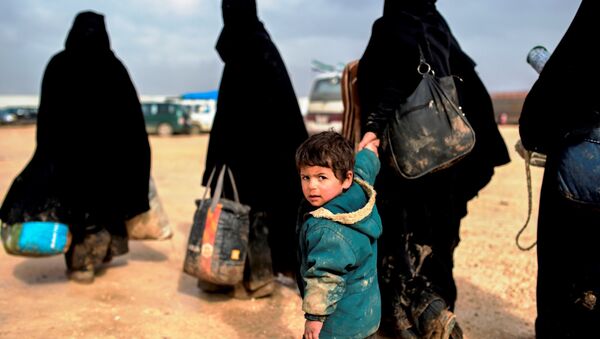 Last-minute talks between the President of the European Commission Jean-Claude Juncker and Turkish Prime Minister Ahmet Davutoglu are due Wednesday amid angry calls from lawmakers to decouple the deal from Turkish membership of the EU.

EU-Turkey Deal: Europe ‘Has Lost Its Raison d’Etre'‏
European Commissioners will Wednesday hold crisis talks over the legality, operation and financing of the deal brokered between German Chancellor Angela Merkel and Davutoglu to pay Ankara more than US$6 billion in return for Turkey stemming the flow of refugees into Europe. The European Union would then agree visa-free access to the EU for 75 million Turks and the speeding-up of Turkey's EU membership.

The most controversial part of the yet-to-be agreed deal concerns Greece sending back "irregular migrants" — those refused asylum — to Turkey in a one-for-one swap for Syrian refugees who will be relocated into EU states in a move which many human rights group — including the UN refugee agency, UNHCR, say is immoral, if not unlawful.

"As a first reaction, I am deeply concerned about any arrangement that would involve the blanket return of anyone from one country to another without spelling out the refugee protection safeguards under international law," Filippo Grandi, the United Nations High Commissioner for Refugees, said on Tuesday.

"An asylum-seeker should only be returned to a third state, if the responsibility for assessing the particular asylum application in substance is assumed by the third country; the asylum-seeker will be protected from refoulement [the movement of a victim or persecution back to the persecutor]; and if the individual will be able to seek and, if recognized, enjoy asylum in accordance with accepted international standards, and have full and effective access to education, work, health care and, as necessary, social assistance," he said.

A European Council summit on Thursday and Friday (March 17-18) looks unlikely to sanction the deal, with Cyprus threatening to torpedo the deal which would accelerate Turkish membership of the EU, several member states refusing to accept relocation quotas and European Parliament lawmakers saying the refugee crisis should not be coupled with Turkish EU membership bid.

Proposed EU-Turkey deal is so clearly wrong, why is it even on the table? #StopTheDeal https://t.co/hAwGRQC1Bn pic.twitter.com/n9bGOFGGYk

Members of the European Parliament Foreign Affairs Committee said in a report Tuesday that EU-Turkey cooperation on migration should be uncoupled from the EU accession negotiating process, because of Turkey's record on human rights, media freedoms and repression of the Kurds.

My remarks after meeting PM @Ahmet_Davutoglu ahead of Friday's meeting in Brussels: https://t.co/ibf5qkq9ea. #EUCO pic.twitter.com/DyuDCOBU4W

The committee expressed: "concern about the escalation of violence in the south east of Turkey, which caused almost 400,000 people to leave their houses. Outsourcing the refugee crisis to Turkey is not a credible long-term solution to the problem.

They believe that the EU-Turkey Joint Action Plan on refugees and migration management should be implemented immediately, but only as "part of a comprehensive cooperation agenda based on shared responsibility, mutual commitments and delivery." Furthermore, "EU-Turkey cooperation on migration should not be linked to the calendar, content and conditionality of the negotiation process."

Lawmakers from the Socialists and Democrats in the European Parliament are staging a demonstration in Brussels Wednesday, in protest at the slow pace of agreement on the refugee crisis. A plan to relocate 160,000 refugees from Greece and Italy — agreed in September 2015 after months of disagreement — has, by March 15, 2016 only moved 937. Only 15 Member States have offered places to Greece for relocations.