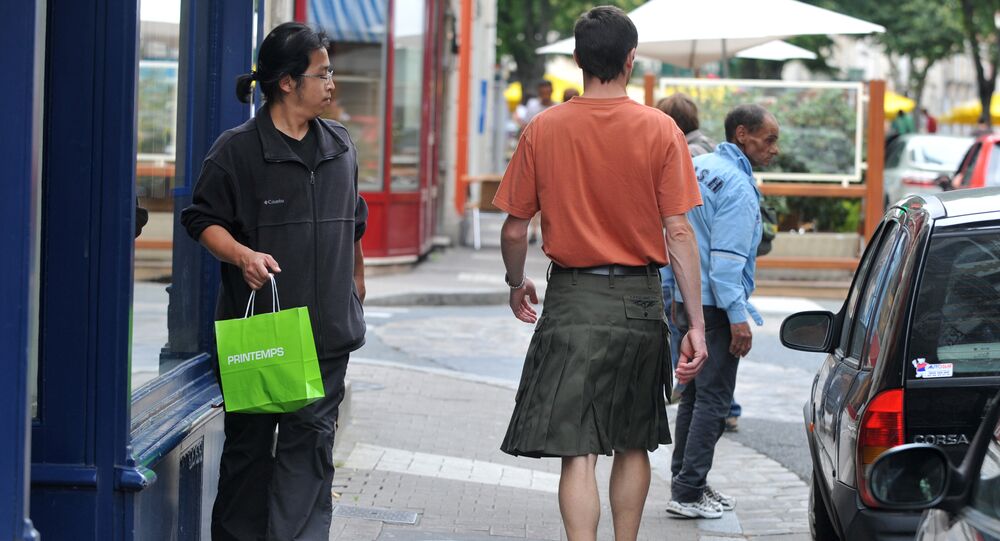 Liberal Europe on the Brink of Demise? Its ‘Feminized’ Men Can’t Protect It

Europe has found itself in the midst of a “textbook style crisis”, which has all the potential to take a dangerous development into a civil war; however the “feminized men in Western Europe, who in protest against the rape of women in Cologne dress up in skirts” are completely unable to withstand it.

© Photo : Twitter/AD.nl
Support in Stockings: Dutch Men Wear Miniskirts After Cologne Sex Attacks
Europe is now in the middle of a “textbook crisis,” which has “all the signs of overthrowing the State,” according to Polish political journalist Konrad Stachnio.

The textbook crisis, he explained in the article for the New Eastern Outlook website, consist of three phases: destabilization, the crisis itself and the so called normalization.

What is going on the continent right now, the journalist explains, has all the indications of ongoing destabilization phase.

“The Roman Empire showed us what we all know: the great empires fall if the boundaries are not well protected. Stop the migrants – we need to stem the flow of migrants coming to Europe, we cannot maintain the current level,” the journalist quotes Dutch Prime Minister, Mark Rutte as recently telling to a small group of journalists from Brussels.

© Photo : Stockholms Kulturfestival facebook
Major Politically Correct Cologne-Like Cover Up Exposed in Sweden
Having called the current refugee crisis in Europe the destabilization phase, the journalist elaborates that this phase will be followed by a crisis.

However in Europe it has all the signs of growing further into a much more serious one: a civil war and external interference.

“Right now we have in Europe a growing conflict between supporters and opponents of the refugees,” he explains. “Between Pegida and so-called the left wing. Between Muslims and their opponents.”

A feature of destabilization is also the total disintegration of State services.

“If you look at the incompetence of e.g. the German Police in relation to offenses committed in Germany, such as those in Cologne, it is hard to find a better example of State services disintegration,” he adds.

© AFP 2020 / RAMI AL-SAYED
'One Must Be Blind or Stupid Not to Realize That Russia is Defending Europe's Interests in Syria'
Another example of destabilization provided by the author is that people organize themselves into self-defense groups because of the lack of an effective defense provided by the State.

“We are currently experiencing that in several European countries,” he states.

“These are just a few indications of crisis aggravation, that can lead to a civil war in Europe, especially if this lead to the creation of mass ‘Islamist movement’ in Europe, something like the ‘Arab Spring in Europe,’” he states.

The signs of external interference cited by the author are the Daesh cells which are being formed in Europe:

“Daesh sends to Europe its cells and smuggles weapons including chemical and biological ones. What is more, it via the Internet or in person, recruits new members to its cells in Europe,” he says.

© Photo : Screenshot/TVN24BiŚ/Świat
What's the World Coming to? Polish Generals Say US, Europe 'Need Russia'
After this stage should come a so-called “normalization,” namely the establishment of a new order and getting rid of all those who have helped to stir up the fire in Europe.

However, the author explains, it is also a very dangerous stage for Europe, as after this come the so called “liberals” who will contribute to the disintegration of Europe with all their strength.

“In my opinion, ideology that could lead to the collapse of Europe is precisely liberalism,” he states.

He provides as an example “Europe’s humanitarian suggestions and actions expressed by such representatives of the so-called West like Bill Gates.”

‘Software substitutes, whether it’s drivers and waiters or nurses … progressing … With time, technology will reduce the need for jobs, especially in the lower end of the skill set […] In 20 years, the demand for labour for many basic skills will be much lower. I do not think that people have this in their mental model,” Stachnio quotes Gates as saying to the Washington economic think tank of the American Enterprise Institute.

© REUTERS / Giorgos Moutafis
Europe's Refugee Crisis a 'Legacy of Hypocrisy', Economists Tell Sputnik
The above might lead to the revolution of the masses without work, the journalist warns.

However, it “is not the only thing that is waiting for us in the nearest future,” he predicts and gives another possible development of what lies ahead.

“One of the think-tanks of the United Nations, the Tellus Institute, has described for the United Nations the whole plan to implement a global, grassroots civic movement, stating in its report that such a movement is necessary to create social acceptance towards global government which is being created,” the journalist says.

The author then provides excerpts from this plan:

“The model of the expanding circle predicts a gradual process of organizational development, starting from a relatively small group of committed people supported by loosely linked network of people and organizations. In pursuing its activities, the initial circle will develop strategies for expanding into the next circle, a pattern which will be duplicated at each stage. In this way, the organization will periodically stop to evaluate, adjust and reorganize for greater circle and to improve the program.”

“We have created an expanding circle, a new organized effort designed to support the formation of a global civil movement. Instead of a rigid plan, TWC strategy assumes an increase in successive waves, adapting to changing circumstances, including development and diversity.”

© AFP 2020 / NICOLAS TUCAT
Men athletes dresses in colourful skirts run past Medoc's vineyards, near Pauillac, during the 30th Marathon du Medoc, a 26-mile (42.2km) circuit in the Medoc wine region near Bordeaux in south-western France which takes in more than 30 of the regions' chateaux and vineyards, on September 13, 2014

Europe and, in fact, the whole world, the author suggests, are facing “two aggressive and clashing approaches to the future of our planet,” one being represented by the Islamist extremists, the other – by billionaires, like Bill Gates.

Worst of all, he concludes, is that “feminized men in Western Europe, who in protest against the rape of women in Cologne dress up in skirts, will certainly not be those” who are able to respond to the dangers presented.

You Think Europe is Suffering a Migrant Crisis? Think Again