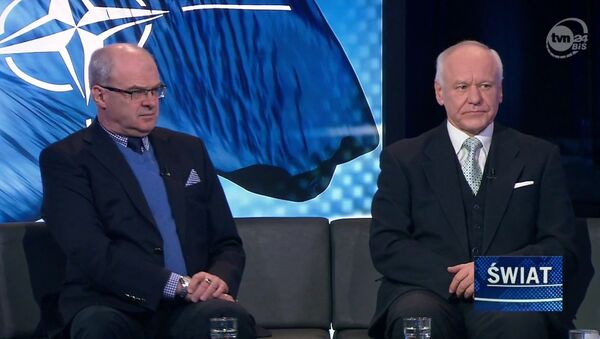 Speaking to Polish news broadcaster TVN 24, Dukaczewski, a former head of Polish military intelligence and counterintelligence, and Skrzypczak, a former deputy defense minister, seemed to indicate that it was time for Warsaw to adopt a more amicable posture vis-à-vis Russia.

Asked by his interviewer about what might be done to end Russia's so-called 'aggression' in Ukraine, Dukaczewski posed a counter question:

"Madam Interviewer, my colleague rightly drew attention to the fact that the world is a complex place. Why didn't we receive the reaction we had hoped for on the Ukrainian issue? Because the Americans have problems with Islamic State [Daesh] and with Iran. Without Russia neither the first nor the second question can be resolved. The French too have problems, for which they need Russia."

Warsaw Boosts Polish-German Border Control to Curb Refugee Influx
"It turns out that at the moment we are not talking about Crimea. We are not saying that Crimea should be given back to Ukraine. We are not even talking about Donbass and Donetsk. Right now, we are talking about whether Russia will help us solve the problem of Iran. Russia is arming Iran, and arming Syria. It is building up areas inaccessible to other countries. Russia is building up its position – and wants to be a strategic, rather than a local player."

With his interviewer commenting on the ongoing discussions in Europe about the removal of anti-Russian sanctions, possibly by the end of this year, General Skrzypczak noted that "of course, already today, on the sidelines, it is being said that sanctions should be limited or, as you've said, removed altogether, possibly next year. In turn, the Russians will look to revive their [economic] power, and their role in the world."

"The question," General Skrzypczak suggested, "is whether the world needs Russia. I believe that the world does need Russia, very much, and so too does the United States, because Russia is taking upon itself a great burden with regard to what is happening in the Middle East. That is, it is taking part in the operation against the Islamic State."

"Europe," he noted, "is looking at Russia differently than the Poles do. This is happening because the West clearly sees that Russia is effectively dealing with the terrorists by a campaign of their wholesale destruction."

Recapitulating, Skrzypczak again asked: "Does the world need Russia? It is definitely needed by the Americans, including to solve the problems in the Middle East and Asia."

With his interviewer suggesting that the Russian air operation in Syria has not strengthened the battle against Daesh, but only served to strengthen the 'Assad regime', leading to more refugees, and threatening German Chancellor Merkel politically, General Dukaczewski responded:

"This is a very ambitious thesis, but it's important to note, first and foremost, that Putin made no secret about what he intends to do. He repeatedly stressed that Assad's position should be strengthened, at a time when the entirety of the West said that 'Assad must go'."

"Putin considered," Dukaczewski continued, "that Assad's position must be strengthened –that everything possible must be done in order not to repeat the mistake that was made in Libya, where Colonel Muammar Gaddafi was eliminated.[At that time], suddenly the gates to Europe were opened, and now we have the migrants from Africa which had earlier been held back by Libya."

Gaddafi's Grim Prophecy Fulfills as Terrorism Spreads Across Europe
For his part, commenting on the suggestion that Russia should be held responsible for the current refugee crisis, General Skrzypczak retorted, noting: "I would like to draw attention to one more thing: before the Russians intervened in Syria, the refugee issue already existed. A million and a half were in Jordan. These refugees did not come about as a result of the Russian intervention."

With his interviewer countering by suggesting that Russia has increased the number of refugees, Skrzypczak noted that "here, first of all, it is necessary to see clearly the conflict which is unfolding with the participation of Turkey and Syria. Secondly [one must see] the conflict between Saudi Arabia, Turkey and Iran for influence in the Middle East. This is the main source of the crisis, and it is this conflict into which Russia, and we — Europe, have joined."

Asked whether Russia and Putin will be able to sow chaos in Europe, 'just as he has done in Ukraine', Dukaczewski responded: "We do not sit in Putin's head. As one intelligence officer speaking of another intelligence officer — Mr. Putin, I can only say that his steps are deeply calculated, and thoroughly analyzed. He has thought through the many 'black scenarios' – that sanctions would be introduced, that he would face problems leading to a restriction on his colleagues ability to travel, that he himself would be treated with a certain level of ostracism. He took all this into account. For now, everything seems to indicate that Putin is achieving his goals. The question is how far will he go?"

000000
Popular comments
At last.Two Poles who speak the truth. But is it to def ears?
jerrys57
13 February 2016, 22:12 GMT
000000
Sanction on Russia have been a godsend It gave Putin the chance to reshape their economy and also it gave him an excuse to do so. The EU should have been aware of the negative consequences of the sanctions but they where too busy to listen to Americans who by the way did not suffer one iota by the sanctions.