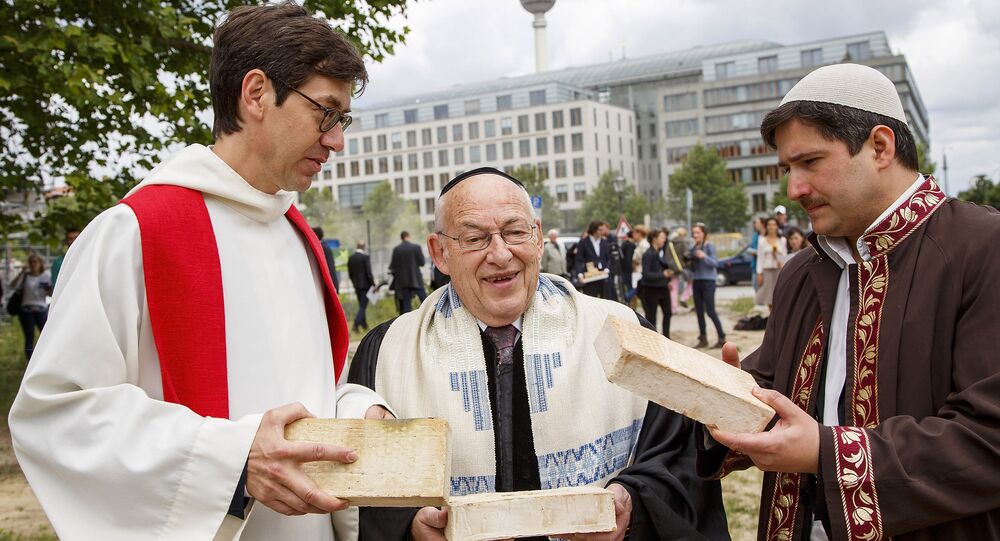 The 'House of One' project in Berlin plans to build a church, mosque and synagogue on a single site in central Berlin with the help of crowdfunding, Imam Kadir Sanci told Sputnik.

© REUTERS / Wolfgang Rattay
German Far-Right Party Holding Anti-Migration Protests in Berlin
The 'House of One' will contain a Christian church, a mosque and a synagogue on one site in central Berlin, and aims to show that it is possible to live together and preserve religious traditions at the same time, Imam Kadir Sanci, a representative of the project, told Sputnik.

"I would put it like this: these three partners – Jews, Christians, Muslims – preserve a connection with their traditions. We do not have any ecumenical mission, we don't want to create a uniform religion. We don't want to conceal disputes or offer answers to them," Sanci explained.

"This quite an innovative idea, to some it is still alien. That is, the idea in itself is not theology or the religious outlook of particular partners, but a kind of form of dialogue."

Sanci is keen to allay fears from some quarters that the initiative might result in a mixing of religions, and said that the project's success depends on maintaining and respecting different religious identities.

"Of course it is much easier to work at a common level, according to the principle that 'we think the same.' It is significantly harder to work out something in common when there are obvious differences. I am sure that somebody who doesn't hide those differences and consciously addresses them, who can work together, can progress much further by engaging in dialogue."

"I would say that it is God's will that the world is so varied," Sanci said.

"If God had wanted to, he would have made everything the same. Why should we destroy that work of art, that beauty? We need to appreciate that another person can perceive and think differently."

The imam said that the House of One project aims to raise 43.5 million euros ($47.7 million) via crowdfunding to construct the building in the center of Berlin, on the site where Petrikirche (St Peter's Church) once stood before it was damaged during the Second World War and eventually demolished in 1964.

"This is a historical place, the whole of Berlin started from here, the Petrikriche once stood here. During the time of the German Democratic Republic it was a concrete parking lot, and later archaeological excavations showed what an important place it is."

He explained that the Christian church community that had previously worshipped at the site was asked what to do with the site, but decided that they did not need a new church to replace the old one. Instead, bearing in mind that Berlin is a city with different religions, and many people are without a religion, they decided that the site should be one for different people.

"That's where it all started, and it is necessary to find the right architectural communication to express this idea, and partners. This idea is not about a Lutheran church building something on this site and inviting other religions to a finished building. Partners are invited from the beginning, on an equal footing, to work out the project."

The architectural plans worked out so far envisage a separate space for each religion that is joined by a common area, Sanci explained.

© Photo : Youtube/The House of One
An architectural plan of the House of One in Berlin
"In the middle of the building there will be some space that joins these halls of prayer, so to reach the synagogue, mosque or church it will be necessary to cross this space. In addition there will be concerts, conferences and other events in this central hall. It will be a meeting place."

"That's why it won't be possible to enter the sacred areas from outside, you have to go through the common area."

"Nevertheless we want to preserve differences – that's why there are three separate sacral premises. We don’t want to hide the differences, we want to show them and in that way demonstrate that we can be friends regardless of our differences, that these differences can unite us."

© REUTERS / Hannibal Hanschke
Berlin Church Priests Hold 'Star Wars' Worship With 'Laser' Swords
While the amount of crowdfunding for the project is currently about one million, some way off its funding target, he said they hope to begin construction within the next two years.

"Anybody can donate a small sum and take part in it. But we need some significant donations for us to collect millions. At the moment there are some signs to that end from politicians, community funds and sponsors, so we are hoping to collect ten million in the near future, which will allow us to begin the first stage of building."

"Crowdfunding is not just a source of funding, for us it is a possibility to show people from around the world that they can take part in the construction of this center."

A priest, rabbi and an imam walk into a house of worship…

​Asked whether such a project might have an effect on the critical stance some non-Muslims take towards Muslims in Germany, Sanci replied that the strength of their project is its small size, and that this is in fact its biggest contribution.

"We are very small, that is not false modesty, that is fact, and we want to stay like that because we can work best this way. We see that the world does not change at once, but we are making our contribution, we are laying one of the stones that are the foundation of the whole world."

"Of course, many people are biased about Islam, and it is important to take such criticism seriously. One of our main tasks is to start a dialogue with people in this way. We are trying to show what Muslims are really like, that people don't need to be scared of them."

"And in our community we can signal to Muslims that we also have responsibility, which we can only bear if we take a strong position. There are three of us in the House of One, so we can support each other."