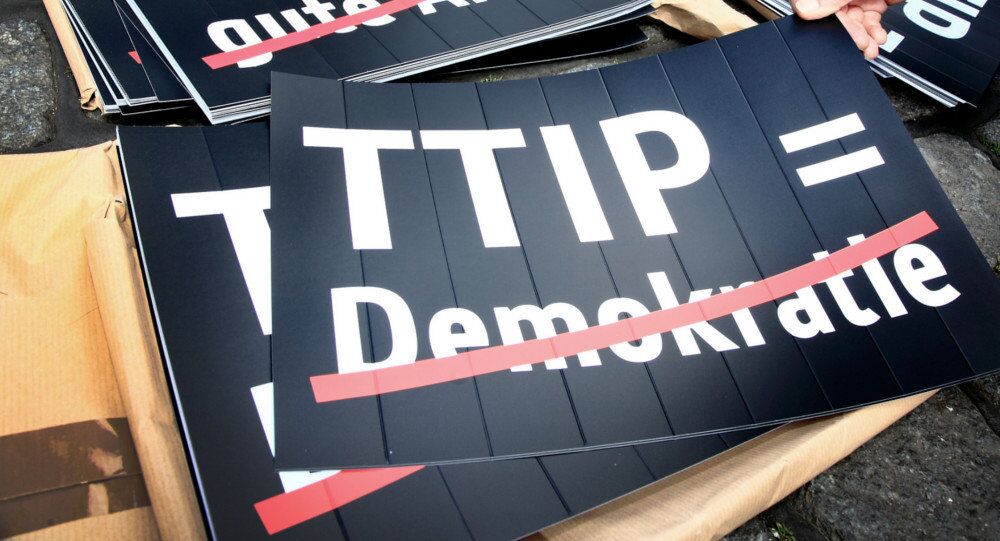 In a response to criticism of covert TTIP negotiations, German politicians will soon be able to get a look at the secret documents in a special reading room at the Ministry for Economic Affairs.

© AFP 2020 / JOHN MACDOUGALL
The King Has His Way: Germany Backtracks on Condemnation of Saudi Executions, Agrees to Sell Arms
The German government has reacted to criticism of secretive Transatlantic Trade and Investment Partnership (TTIP) negotiations by providing a reading room in the Federal Ministry of Economic Affairs, where politicians will be able to read TTIP documents.

TTIP is a bilateral trade agreement between the EU and US that aims to reduce regulatory barriers to trade. In practice, the deregulation threatens the dismantling of legal standards in areas such as privacy, environmental protections, food safety, public health and safety at work. It also strengthens copyright and patent restrictions which, according to the Electronic Frontier Foundation, "would never pass muster under public scrutiny."

The proposed TTIP agreement also opens up more public services and government contracts to the private sector, and critics have raised concerns that privatization would be effectively irreversible.

The secrecy of the negotiations, which are being conducted by the US government, the European Commission and corporate lobby groups behind closed doors without input from the general public or their democratically-elected representatives, has added to public concerns about their content.

© Flickr / Global Justice Now
Lobbyists Love TTIP: Big Business Already Exploiting New Trade Deal
The agreement's contents will only be disclosed when the negotiations are complete, and those who oppose the deal have been able to arm themselves with information only due to Freedom of Information requests and leaked documents.

On Tuesday, the Funke Media Group reported on the contents of a leaked letter from German Minister for Economic Affairs Sigmar Gabriel to Bundestag President Norbert Lammert and Bundesrat President Stanislaw Tillich, which offers German federal and state politicians the chance to examine TTIP documents in a special reading room at the Ministry.

Gabriel said the offer was a bid to increase confidence in TTIP negotiations, and offered to open a room in his ministry for the viewing of documents from February 1.

German politicians will be able to see "consolidated negotiating texts," meaning documents in which the positions of both the European Commission and US government are presented, according to the report.

"The necessary better acceptance and legitimacy for the negotiations between the European Commission and US can only be created through transparency and close involvement of national parliaments," Gabriel wrote, portal Der Westen reported.

"Since the beginning of the negotiations about TTIP, [the German government] has promoted transparency both with regard to the public and the parliaments of EU member states," the minister said in his letter to the two chambers of parliament.

TTIP Unacceptable Due to Secrecy of Negotiations - UK Official

Rising Against the Machine: Some 5,000 Protest in Berlin Against TTIP Deal