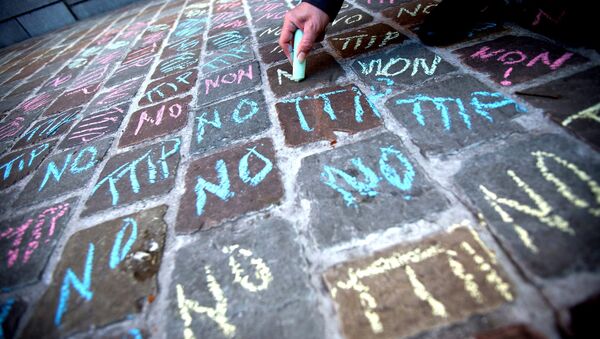 Rising Against the Machine: Some 5,000 Protest in Berlin Against TTIP Deal
The Transatlantic Trade and Investment Partnership (TTIP) trade agreement has been exploited on several occasions by lobbyists who used the agreement to interfere with the legislative process in Europe, Der Spiegel reported on Monday.

One aspect of TTIP negotiations between the US and EU uses the framework of "regulatory cooperation" to dismantle "regulatory barriers" to transatlantic trade, and prevent the emergence of new regulations that could block trade.

The mechanism has sparked concerns that it is used by lobbyists to change EU standards in favor of business, at the expense of regulations regarding such areas as environmental protections, safety at work and public health and food safety.

"Big industry has succeeded in using the framework of the Transatlantic Business Dialogue to enforce its interests at the expense of the common good," Max Bank from the campaign group Lobbycontrol told Der Spiegel.

Transatlantic Business Dialogue (TABD) is a lobby group of CEO's that has been meeting with top officials from the European Commission and US Department of Commerce since the 1990s.

Der Spiegel reported that executives from companies such as BASF, Audi, Merck und Ford have used the meetings to push their agenda.

'Study on TTIP: The dreams of lobbyists have been a reality for a long time,' reported Der Spiegel.

​The newspaper also quoted EU Commissioner Erkki Liikanen, who said in 2003 that TABD "makes recommendations to governments," and that "The EU and US have collectively undertaken to examine and implement the recommendations of the TABD."

"For example, the world's then largest insurer, AIG largely unnoticed used credit default swaps to make incredible bets. In the financial crisis, AIG had to be saved by the US government, with $182 billion."

"The report examines the origins and impacts of TTIP's proposals for regulatory cooperation and shows that the process has been dominated by big business right from the start," CEO said, which published the report on its website.

"The examples highlighted in the study are the weakening of EU ambition on the management of hazardous electronic waste, the lack of supervision of the insurance giant AIG in the years leading up to the 2008 financial crash, the free pass offered to US companies on the Safe Harbour agreement that allowed them to ignore rules on the protection of personal data, and delayed or weakened proposals on animal testing, ozone-depleting substances, and aviation emissions."