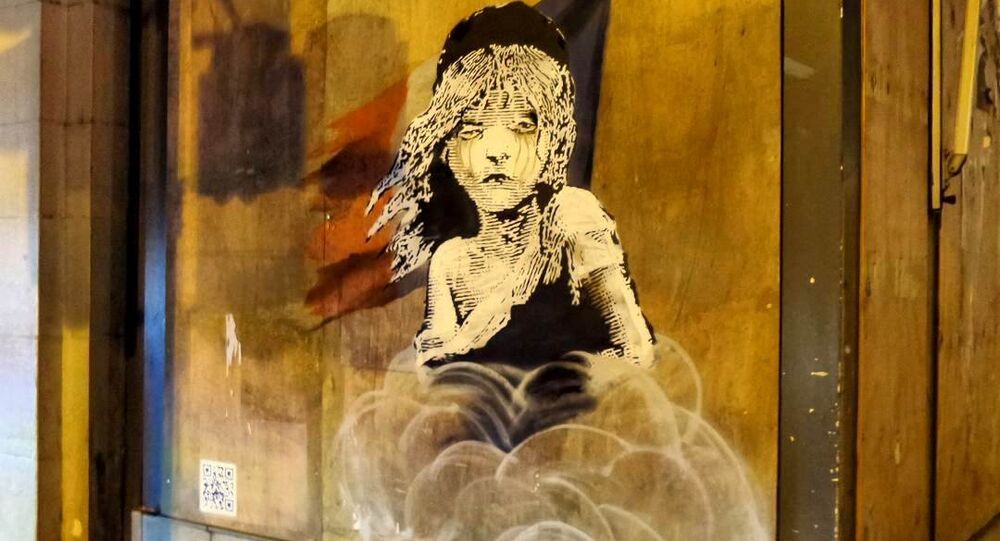 The stenciling of social injustice - street artist Banksy has spray-painted a mural opposite the French embassy in London to highlight the use of teargas on refugees by the French police. The image, taken from the French musical Les Miserables, depicts a young girl crying with CS gas billowing from a canister in front of her.

The French government wants to demolish the make-shift tents at the Calais 'Jungle' camp and force 2,000 migrants to live in shipping containers that, refugees claim, resemble a detention center.

Around 300 'Jungle' inhabitants recently clashed with riot police, who fired rubber bullets and tear gas to break up the protest against the compulsory move.

The treatment of migrants and refugees by the authorities in Calais is now plastered on a wall opposite the French embassy in London. Banksy has made his latest political point.

It’s not the first time the street artist has used art to highlight the plight of refugees living in the so-called Jungle camp in Calais. First he shipped his Dismaland structures to help build make-shift shelters in camp; he then stenciled a picture of Steve Jobs, the founder of Apple clutching a computer in a bin bag because Jobs was the son of a Syrian refugee.

"We’re often led to believe migration is a drain on the country’s resources, but Steve Jobs was the son a Syrian migrant," Banksy said in a statement.

Banksy also painted his own version of French Romantic artist’s Theodore Gericault’s Raft of Medusa in the town of Calais with the words: "We’re not all in the same boat". The picture featured a luxury yacht and a helicopter.

#Banksy's 'The Raft of the Medusa' in Calais #LetThemIn pic.twitter.com/7SUn0MOeJn

In what’s believed to be the first piece of interactive street art produced by Banksy, the mural opposite the French embassy in Knightsbridge, includes an interactive QR code which when scanned by a mobile phone, links to a video showing rubber bullets and tear gas being used by French authorities on a raid of the refugee camp on 5 January.