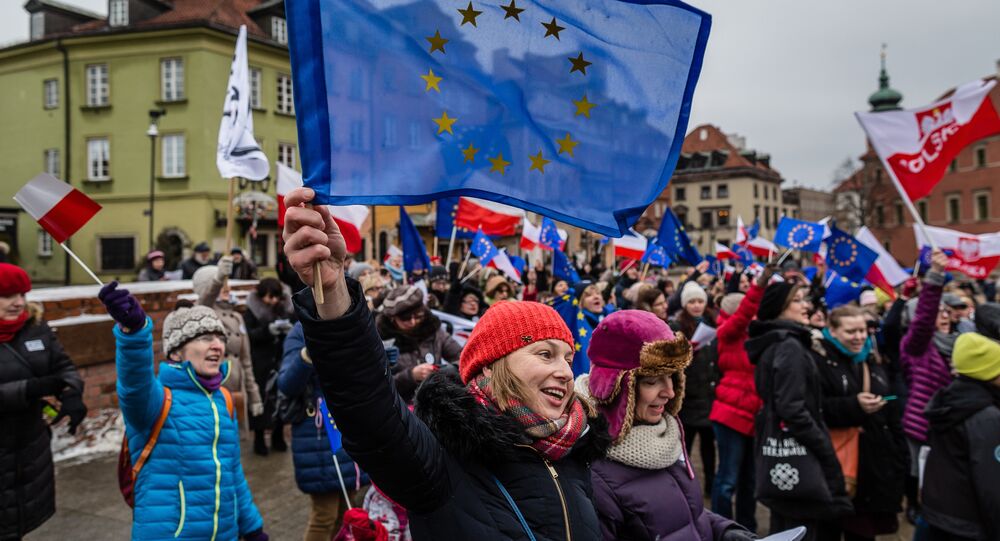 The EU-Russia Civil Society Forum urged the Polish leadership to uphold the democratic principle of separation of powers against the backdrop of two debatable changes to the country's legislature on media and justice.

VIENNA (Sputnik) — The Steering Committee of the EU-Russia Civil Society Forum has called on the Polish government, President Andrzej Duda and the ruling Law and Justice party to discard the recent changes to the country's legislature and adhere to the standards of the rule of law and the democratic principle of separation of powers in future, according to a statement by the Forum.

© AP Photo / Czarek Sokolowski
PC Uber Alles! Germany Threatens Sanctions Against Poland Over 'Lack of Western Values'
Earlier in the month, Duda signed a decree giving his government power to appoint the heads of public television and radio, triggering widespread opposition from EU leaders and freedom of the press advocates. On December 28, Duda enacted a reform stipulating that 13 out of the country's 15 constitutional tribunal judges must be present at the most important court cases instead of the current nine. The reform will enable the Law and Justice party to influence the tribunal's decisions, according to critics.

"We urge the Polish authorities to take measures to improve the situation and propose further changes to the legislation in accordance with international standards of the rule of law," the statement, obtained by RIA Novosti on Wednesday, reads.

The Forum believes the Law and Justice party is using its mandate to "tighten government control over the third judicial branch of power and the fourth [branch], mass media."

The European Commission held an orientation debate on Poland earlier on Wednesday, while the European Parliament is scheduled to hold a plenary session on the country's controversial reforms on January 19.

The EU-Russia Civil Society Forum was established in 2011 as a platform for non-governmental organizations, with 154 members from Russia and the European Union.