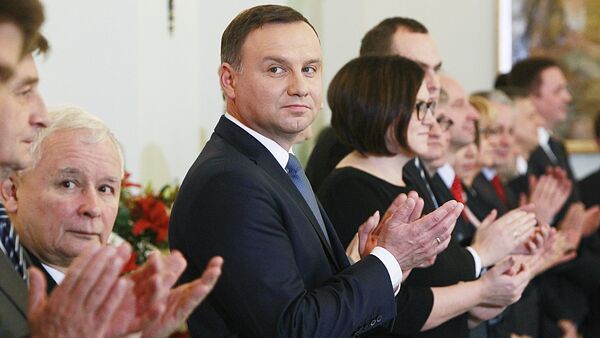 Last year, Poland's conservative nationalist Law and Justice party (PiS), led by former Prime Minister Jaroslaw Kaczynski, captured both the presidency and parliament at elections in May and November. Since taking office, the party's lawmakers have used their parliamentary majority to initiate a series of controversial legal reforms, causing concerns both at home and abroad, specifically in Brussels and in Berlin.

EU Steps Up Pressure on Poland Over Constitutional Law Row
The reforms include changes to the rules surrounding the operation of the country's constitutional court, and, more recently, a new media law, giving the government the power to appoint the heads of public television and radio broadcasters directly, which critics suggest amounts to the restriction of media freedom.

Since coming to power late last year, Prime Minister Beata Szydlo's PiS government has also eased out the head of the country's anti-corruption watchdog, and worked to limit opposition oversight over surveillance services, moves which, together with the initiatives regarding the courts and the public broadcasters, have been criticized as unconstitutional.

The view from Berlin is that Warsaw must be punished for its alleged transgressions. Volker Kauder, the chairman and parliamentary group leader of Chancellor Merkel's Christian Democratic Union (CDU), advocates imposing sanctions against Poland, should the country continue to flout the EU-defined rule of law.

In an interview with Der Spiegel, published Saturday, Kauder noted that the EU must "find the courage to apply sanctions on the breach of European values," adding that "the Polish government should know that in Europe you cannot violate some fundamental values."

Brussels Draws Up Sanction Plan for Defiant Polish Government
For his part, Herbert Reul, the chairman of the CDU/Christian Social Union in Bavaria group in the European Parliament, concurred with Kauder on the need to impose 'penalties' on Warsaw. "The economic sanctions are necessary if political dialogue does not lead to results," the politician told the magazine.

The lawmakers' commentary follow on the announcement made last week by EU media commissar Gunther Oettinger that the EU is preparing a series of 'special measures' against the Polish government, up to an including denying Warsaw voting rights in the EU if it continues to ignore Brussels' warnings.

"It says a lot that we are now activating the rule of law mechanism and putting Warsaw under supervision," Oettinger, the EU's Digital Economy and Society Commissioner, told Frankfurter Allgemeinen Sonntagszeitung last Sunday.

The 'mechanism' in question is the EU's 'framework for addressing systemic threats to the rule of law', and as a last resort allows Brussels to withdraw member states' voting rights if attempts at persuasion fail. The tool could be activated following an EC summit on Wednesday, where EU leaders will discuss Poland's controversial reforms.

Will Poland Be the Next Chapter in the Political Crisis Plaguing Europe?
Leading to fierce debate and protests inside Poland, the new laws and the reaction in Berlin and Brussels has also poured fuel on the fire of the growing conflict between Warsaw and the EU establishment, with angry Poles protesting what they see as Berlin and Brussels' bullying tactics.

On Friday, at a volleyball match against Germany, Polish fans unfurled a large sign reading 'Protect your women, not our democracy!', referring to the sexual assaults against German women by Arab and North African migrants on New Year's eve in Cologne, and suggesting that Berlin should deal with its own problems before instructing its neighbours on how to run their affairs.

Anti-EU and anti-German sentiment is strong and growing stronger among the PiS government and their supporters. Not long ago, Der Spiegel explains, Poland's controversial foreign Minister Witold Waszczykowski had alleged that up to now his county has been a "vassal of Berlin."