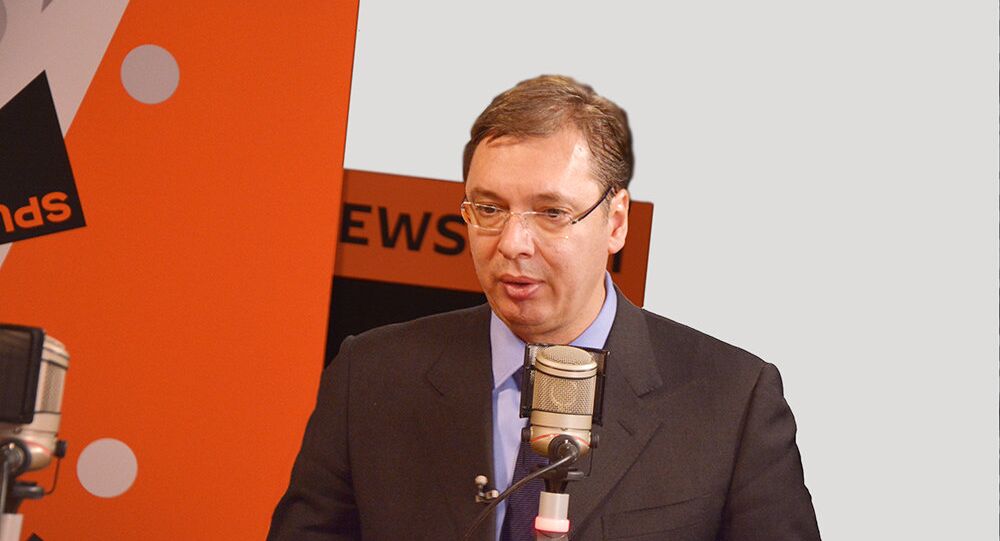 Serbian Prime Minister Alexander Vucic visited the offices of Sputnik Serbia, where he wished the agency success for the coming year, and responded to recent comments from the US ambassador in Belgrade regarding the Kosovo issue.

© AFP 2020 / ANDREJ ISAKOVIC
Serbian MP Reassures Russia That Belgrade Against Joining NATO
Serbian Prime Minister Alexander Vucic has responded to comments by the US ambassador to Serbia Michael Kirby regarding the normalization of relations between Belgrade and Pristina, which in Washington's opinion entails Kosovo's membership in the UN.

"We are not asking Serbia to recognize Kosovan independence, but the normalization of relations between Belgrade and Pristina. What that normalization will eventually mean is for the EU to define, but for us that includes Kosovo's membership of the UN," said Kirby in an interview with the Serbian press last week, which caused anger among Serbian readers.

On Friday, Vucic visited the offices of Sputnik Serbia, where he made an effort to address Kirby's statement.

© Sputnik / Ruslan Krivobok
Bumpy Road: Kosovo Issue Overshadows Serbia-EU Accession Talks
"The only thing I can say is that we of course respect the US, their strength and size, we respect the US ambassador in Belgrade, who I consider a decent person, a friend of Serbia."

"But we have different politics, we have the politics of the Republic of Serbia which on this issue are different from those of the US," said Vucic, adding that Serbia is also opposed to Kosovo becoming a member of UNESCO.

In November, Kosovo failed in its bid to become a member of the United Nations Educational, Scientific and Cultural Organization (UNESCO) after failing to get the necessary supporting votes from two thirds of UNESCO members.

Its application for membership came despite numerous instances of the destruction and vandalism of historical Serbian Orthodox sites in Kosovo, some of which have been spray-painted with the symbols of Islamic extremist groups operating in Syria and Iraq.

"We have our politics; that does not change overnight, we consider it responsible and serious politics and that is how we will conduct ourselves in the future," said Vucic on Friday.

"You cannot resolve overnight a problem that has existed for a hundred years or more, you cannot solve it with heroic battle cries, nor solve it in a day in a way which would most please our people."

"So you have to protect your interests and your people as much as you can, and secure economic prosperity and everything else. They are the most difficult issues, and I don't hide that."