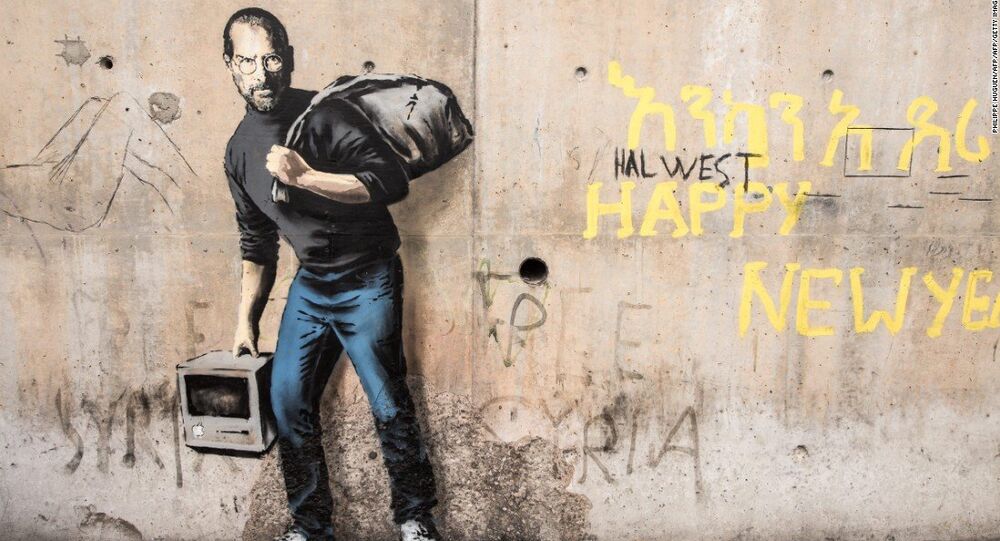 Street artist Banksy is no stranger to one of Europe's largest migrant camps in France. First he shipped off the remnants of his Dismaland Bemusement Park to Calais; next he stenciled the image of Steve Jobs, founder of Apple, carrying a computer and a bin bag on a wall in the camp.

The piece of art was to point out that the Apple co-founder was the son of a Syrian refugee. His biological father, Abdulfattah 'John' Jandali was from the city of Homs.

"We're often led to believe migration is a drain on the country's resources, but Steve Jobs was the son of a Syrian migrant. Apple is the world's most profitable company. It pays over US$7 billion a year in taxes — and it only exists because they allowed in a young man from Homs," Banksy said in a statement released alongside the images.

And it's since emerged the migrants living in the camp in Calais are also showing signs of Jobs' entrepreneurial spirit.

Migrants are making people pay to see a Banksy mural of Steve Jobs in Calais https://t.co/47kbNWf2oL

People living in the camp have erected a blanket cover over Banksy's mural of Steve Jobs and are charging people to view it.

One migrant reportedly said to potential Banksy fans, "if you haven't got five euros then go away."

Banksy has been a little bit busy in the French town of Calais lately. He's painted his own version of French Romantic artists, Theodore Gericault's Raft of the Medusa, which features a luxury yacht and a helicopter with the words: "We're not all in the same boat."

It's believed around 5,000 migrants are living in the so-called "Jungle" camp in Calais, many of them hoping to one day reach Britain.

Banksy's Dismaland Bemusement Park in North Somerset brought the seaside town of Weston-Super-Mare US$ 30.5 million, helping put it back on the map as a tourist destination.

© Flickr / Ben K Adams
Cinderella’s Castle at Dismaland: step inside the fairy tale and see how it feels to be a real princess.

Over the English Channel in France, authorities in Calais have long complained that the migrant camp is putting off tourists from visiting the town.

Maybe Banksy fans will now put the port on a list of places to visit; but if they want to see any of the artwork in the camp, they'll have to pay for it first.