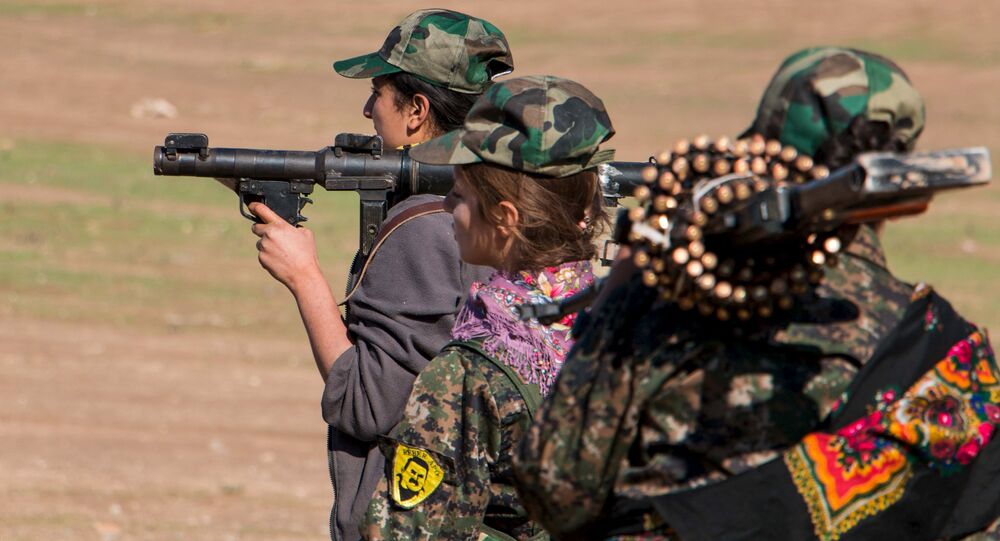 Joanna Palani is a young Danish woman of Kurdish descent, who became famous worldwide when she declared she was leaving Denmark and heading to the Middle East to fight ISIL.

The 22-year-old is one of many Westerners to join the fight against ISIL in the Syrian city of Kobani.

© Photo : Facebook
Blurred Line: Denmark Treats Woman Fighting Against ISIL Same as Potential Extremists
When asked in a recent interview with Sputnik about the reason why she decided to drop out from university and fight against ISIL together with Kurdish armed forces in Iraq, Joanna said she decided to go after Kobani and Shingal were seized by ISIL and civilians were attacked and killed there.

She believes that every country should fight against or at least help the Kurds fight against ISIL and other terrorist groups, but she did not think that the Kurds have been recieving much help on the ground from the US-led coalition.

In Denmark, Joanna heared news about her people being killed “from every side” and, unable to focus on her own life, she finally decided to leave school and friends to join the fight against the Islamic terrorists in Iraq where she spent almost a year as a drill sergeant in a womens camp in Kurdistan.

When asked if the Kurdish forces need any support, arms or equipment in their struggle against ISIL, Joanna said they certainly do.

“Every time we were in combat with ISIL or al-Qaeda, we didn't have good equipment, while the ISIL forces are mostly armed with modern US weapons from 2003,” she complained.

Once she returned to Denmark to take a brief break from fighting, Palani said she had her passport seized by police and the Danish intelligence service PET.

“They took away my passport and said I was not allowed to leave Denmark because I was a “threat to the Danish state,” which doesn’t make sense since Denmark is also a part in the fight against ISIL. I have a lawyer now, who helps me. We are going to a curt with this decision.

When asked about her plans for the future, Joanna Palani said she wanted to go back to her unit and keep doing her duty.

“And when the war with ISIL is over, I will go back to my school again… If I’m not dead by then,” she said.

Are You Danish Enough? Denmark Tightens Rules for Foreign Spouses