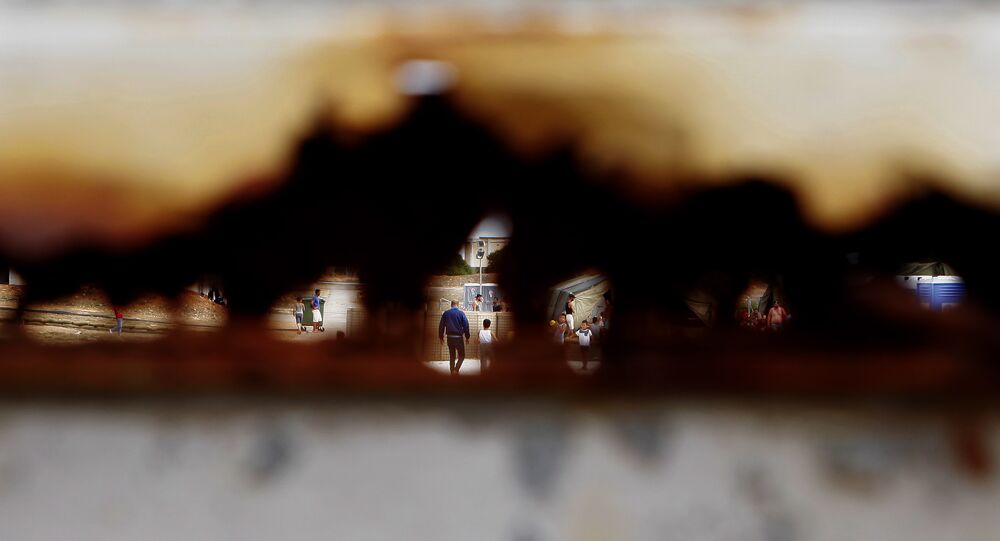 Refugees washed ashore on a British military base on Cyprus are to be deported. Migrants camped on the Dhekelia base have been sent "intention to deport" documents with only a week to set out their case as to why they have not claimed asylum on the Mediterranean island.

The group of adults and children from refugee camps in Lebanon have been warned that they will be returned to Beirut because they have not chosen to claim asylum in Cyprus.

Five men and one woman have since claimed asylum and have been transferred to the Cypriot authorities — the remaining 109 are staying in an a camp surrounded by barbed wire which has been described by some refugees as being like "Guantanamo Bay" in Cuba.

But the message from the British government is clear. If they don't claim asylum in Cyprus — they will be forcibly deported back to Lebanon, triggering the threat of a hunger strike among some migrants in the camp.

According to a government source, Britain was being "firm but fair". Speaking to London newspaper The Times, the source said:

"We've been clear throughout that they can all claim asylum in Cyprus. But where some want to hold out for another European Union country, we have to resist that. Otherwise we are just building a bridge and encouraging others to risk their lives on a very dangerous journey."

Spokeswoman for the base Connie Pierce told the Cyprus Mail: "We have been clear with the migrants on the options open to them and they have also had advice from the UNHCR.

"The UK government will not allow a new migrant route to open to the UK."

Meanwhile, the asylum seekers have vowed to fight deportation. "We are going to fight this decision. We are not going to Lebanon. Let them do it by force", Ibrahim Marouf told the Cyprus Mail.

"We thought England would see us as humans not as Muslims or Arabs."

Marouf told the reporter that he boarded the boat in search of a better life in the hope to reach Belgium and join his siblings.

Spoke to migrants on Dhekelia. Lots of frustration: want Britain to take them in, if not another European country — but not Cyprus

"If not [the] UK, at least Germany, Netherlands or Switzerland," he says are countries that offer a "decent and peaceful life." Marouf claims that if he is sent back to Lebanon he will be "slaughtered in the civil war no one knows about."

Britain claims the refugees are under the care of the Cypriot authorities — but the United Nations High Commissioner for Refugees and Cypriot government officials says the agreement stipulates that they are the UK's responsibility but granted access to services in Cyprus at the British government's cost.

280K refugees come to Lesbos. EU struggles to cope but do try. 140 arrive on UK soil in Cyprus and we can't treat even them decently. Shame!

The remaining refugees on the island have been given a week to set out their case of choosing not to claim asylum there. "I will consider any representations made by you and will then decide whether to make a deportation order," Philip Rushbrook, a senior official wrote in the "intention to deport" document.

Much talk of migrants in Cyprus and Calais in media. Both safe countries so they should claim asylum there. https://t.co/O6lHgRW6RZ

The situation for the asylum seekers staying on what some of the group has described as "Britain's Guantanamo" in Cyprus has allowed the British government the opportunity to spread their message that the UK will not be seen as being a "soft touch" on immigration amid the refugee crisis gripping Europe.