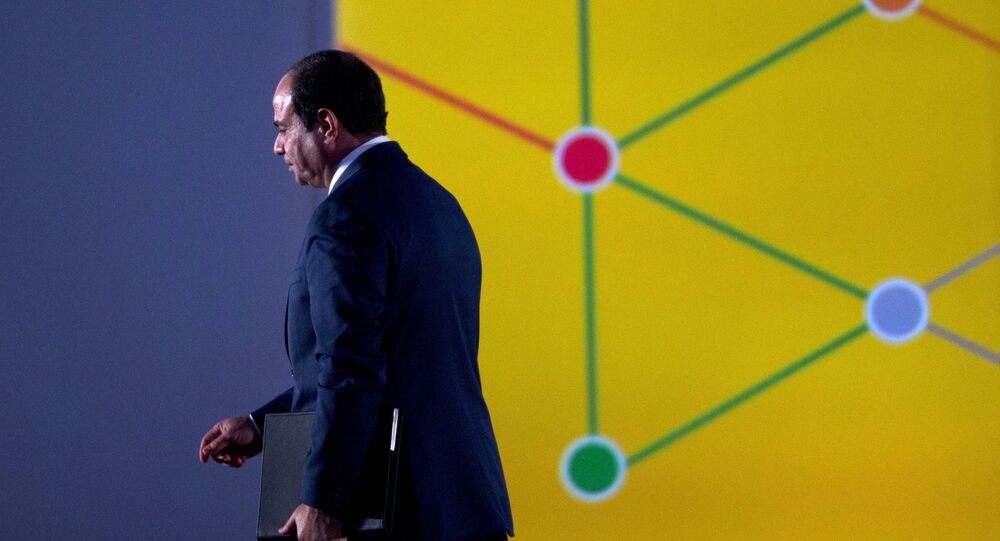 A diplomatic row has broken out between Cairo and London after the UK Government barred all British flights into and out of Sharm el-Sheikh airport over security concerns at the airport and intelligence that ISIL planted a bomb on the Russian aircraft that crashed on October 31.

© AP Photo / Matt Dunham
Cameron's UK Invitation to Egyptian Leader Threatens National Security
On the day Egyptian President Abdel Fattah al-Sisi meets UK Prime Minister David Cameron, the Egyptian foreign minister has hit out at Britain's decision to ground all flights in and out of Sharm el-Sheikh after intelligence reports suggested a bomb had been placed on the Airbus A321, operated by Russian airline Kogalymavia, flight number KGL9268, which crashed on the Sinai peninsula on October 31.

Sharm el-Sheikh is a popular tourist resort and the UK's decision to temporarily suspend flights has been greeted with anger in Egypt which is heavily reliant on tourism. Intelligence sources have told Sputnik that the British decision was made after intelligence reports suggested ISIL was behind placing a bomb aboard the downed A321 and there was a possibility it had been placed there by getting round lax security at the airport.

In a statement, the UK government said, following an emergency session of ministers and top security officials:

"The meeting considered the implications of a range of information, including some that has recently come to light, which has increased our concerns that the plane may well have been brought down by an explosive device."

"The Prime Minister was provided with an initial assessment of the security arrangements at Sharm el-Sheikh airport from the team of UK experts who arrived there late this afternoon. The team noted that the Egyptian authorities had stepped up their efforts but that more remains to be done."

Lack of Confidence in Egyptian Security

Sputnik understands that UK security officials have been at Sharm el-Sheikh airport working with Egyptian officials reviewing the security arrangements at the airports, which the UK authorities believes to have been lax. They are looking in particular at access to passenger baggage between the point of check-in and the aircraft cargo bay.

Captain Mike Vivian head of flight operations at the UK Civil Aviation Authority told the BBC: "The British Government and the United States have picked up some sort of electronic 'chatter' and they've been put in the position where they can't ignore it."

I will be holding another COBRA meeting later this morning — overseeing how we are helping British tourists in Sharm el-Sheikh.

However, Egypt's Civil Aviation of Egypt ministry has insisted its airports are secure and that no other country has suspended flights. In a statement, it said:

"There are 23 flights from Russia operating today to Sharm el Shiekh, eight from Ukraine, three from Italy, one from Turkey, two from Saudi Arabia, one from Jordan, one from Belgium."

In said the bomb theory was speculation and "not based on facts".

Russia too played down the British claims with Kremlin spokesman Dmitry Peskov saying:

"We have said this before and we will repeat it again: theories about what happened and the causes of the incident can only be pronounced by the investigation. So far, we have heard nothing (like this) from the investigation. Any kind of similar assumptions like this are based on information that has not been checked or are speculation."

Britain has incurred further wrath by dispatching a team of military advisers to the airport and is not ruling out putting in extra security measures at the airport in a sign that it lacks confidence in Egypt's security services.

Spoke short time ago w/ @EamonnHolmes @SkyNews re #Egypt crash. No UK-bound planes will take off from #Sharm until we're satisfied it's safe

UK travel firm Thomas Cook has canceled its flight and holiday programme to Sharm el Sheikh up to and including Thursday 12 November 2015. It said customers currently in Sharm el Sheikh would remain in hotels free of charge "while the airport security is improved."

Egyptian President Abdel Fattah al-Sisi's meeting with Cameron Thursday was always going to be a difficult affair, with both countries keep to build up trade with each other, but with al-Sisi keen to press Cameron and NATO to go back into its neighbouring Libya and help stabilize it from the civil war which followed NATO's intervention in 2011 to bring down Muammar Gaddafi.

Diplomatic sources say Cameron can expect a frosty reception from al-Sisi who will call on the UK to restore confidence in Egypt's airport security.

London Airport Security Unchanged Amid UK Concerns Over A321 Crash