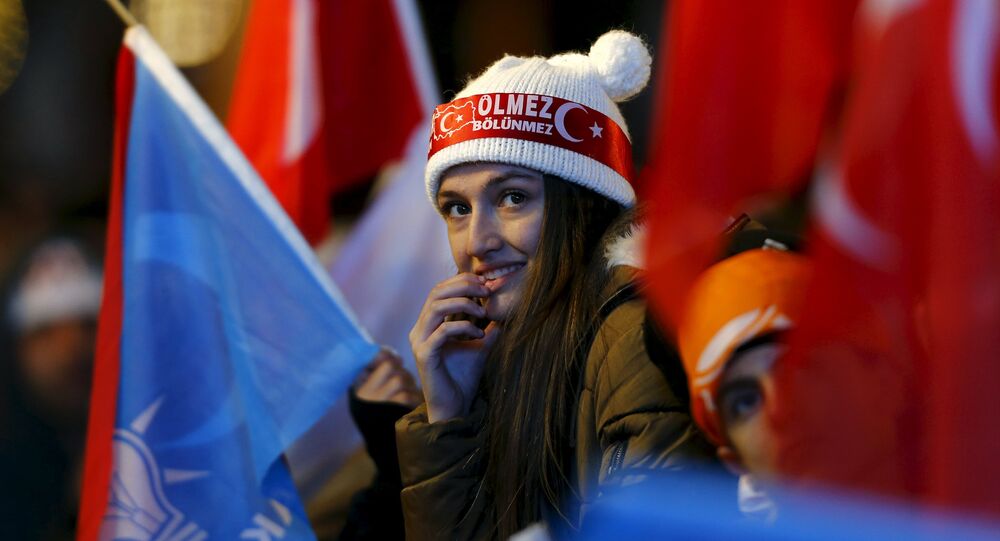 A victory for President Recap Tayyip Erdogan in Turkey's parliamentary elections has put him in full control of Turkish politics until 2019.

"It's me, or chaos," President Erdogan claimed ahead of the country's elections. After the ballots were counted, Erdogan said voters had chosen stability following unrest, as the ruling Justice and Development Party (AKP) won 49.4 percent of the votes.

"The national will manifested itself on 1 November in favor of stability," President Erdogan said, calling for world-wide recognition of the election result.

"Let's be as one, be brothers and all be Turkey together."

As the current refugee crisis is forcing considerable change in European policies, EU leaders will be paying particular attention to the results of the Turkish elections.

© AFP 2020 / OZAN KOSE
Supporters of Turkey's Justice and Development Party (AKP) wave a giant Turkish flag as they celebrate in Istanbul after the first results in the country's general election on November 1, 2015.

Brussels has offered financial assistance to Turkey to help "contain" refugees and membership of the European Union in return for helping prevent them from entering Europe.

EU leaders also have agreed to give US$3.4 billion in aid to the Turkish government, as well as promising to lift visa restrictions for Turkish citizens traveling to the European Schengen zone.

The deal proposed by Brussels has been seen as a boost for Turkey's membership of the EU, which for the last decade has been blocked by France and Germany.

Turkey has been vying for membership since the 1950s and amid Europe's worst refugee crisis since the Second World War; it seems Turkey could fulfil its ambition.

"Whether it suits us or not, whether we like it or not, we have to work together with Turkey," EU leader Jean-Claude Junker told the European Parliament.

In a joint statement released by the EU Vice-President Federica Mogherini and EU Commissioner Johannes Hahn, they said the general elections in Turkey "have reaffirmed the strong commitment of the Turkish people to democratic processes."

"The EU will work together with the future government in order to further enhance the EU-Turkey partnership and to continue to advance our cooperation across all areas for the benefit of all citizens."

The German government which has been accused of carrying out a U-turn over its decision to back Turkey's EU membership after blocking it for the past ten years has welcomed the election win for the ruling AKP party.

"We welcome the fact that yesterday's parliamentary elections were peaceful," Steffan Seibert, German government spokesman told a news conference, adding that Turkey must tackle the challenges it faces which includes fighting Islamic State terrorists and dealing with the consequences of the Syria crisis.

Turkey's election result is a turning point in EU relations and a boost for President Erdogan's potential power to change them.